Bartholomew I to Centesimus Annus: Challenge is Solidarity

Source: Vatican News
Pravmir.com team | 30 May 2018
The Patriarch of Constantinople, Bartholomew I, delivered an address on Saturday before the Centesimus Annus assembly saying that Christian principles alone can heal ecological, technological and political ills. 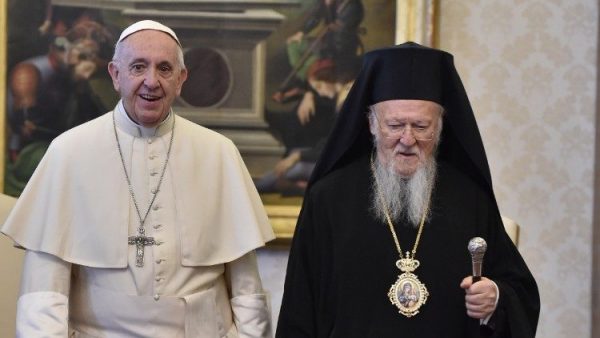 Bartholomew I began by expressing his gratitude to the Centesimus Annus Pro Pontifice Foundation for having invited him to speak. The Patriarch used the theme of the conference, “New Policies and Life-Styles in the Digital Age”, as a framework for his presentation.

The Patriarch first acknowledged that “we are facing a serious crisis and its social outcomes on a global scale”. He defined that crisis as one of a “crisis of solidarity”, or of “desolidarization”. That crisis has been fed by the fields of economy and ecology, science and technology, and society and politics.

By creating ever more insatiable needs, it seems that humanity’s spiritual heritage is being eradicated, he said. Technology has proven itself incapable of resolving such problems as “social injustice, divorces, violence, crimes, loneliness, fanaticism and the clash of civilizations”, Bartholomew continued. Since these problems are not “of a technological nature”, they “can’t be solved through the accumulation of more information”. Quoting an encyclical of the Holy and Great Council of the Orthodox Church assembled in Crete in June 2016, he said that “scientific knowledge does not motivate man’s moral will”. Finally, he drew attention to the tension regarding human rights which has led to extreme individualism in the West and their rejection in “non-western civilizations” as a reaction against the West.

It is our faith which “strengthens our commitment of human action, and it widens our witness for freedom, justice and peace”, the Patriarch went on. The vision of the Orthodox Tradition portrays the human being as “a living being to be deified, which provides human beings with the utmost dignity”. This vision becomes the inspiration for viewing this “multifaceted crisis” as an “opportunity for practicing solidarity”, he said. “Our Churches are called to function as a positive challenge to individuals and peoples, offering an alternative model of life within the contemporary culture that bestowed humanity with precious gifts, but at the same time seems to push people to live for themselves, ignoring the others with whom they are sharing the same world”.