Source: AllAfrica.com
Natalya Mihailova | 03 March 2016
Vatican City — Pope Francis has called for peaceful coexistence in the face of "a devastating outbreak of violence against Christians in the world." 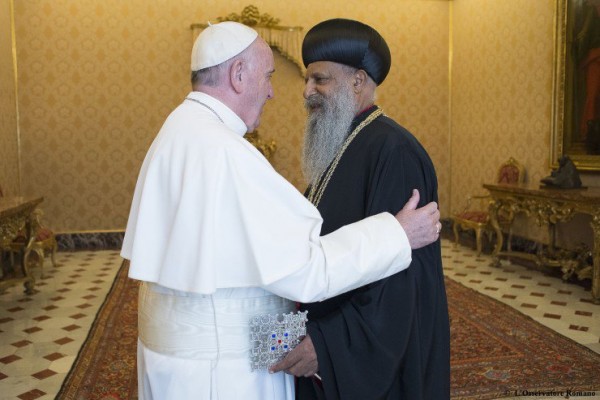 Speaking when he received Ethiopian Patriarch of the Ethiopian Orthodox Tewahedo Church, Pope Matthias I, in the Vatican February 29, Pope Francis told Pope Matthias I “what unites us is greater than what divides us,” and added that “shared sufferings have enabled Christians, otherwise divided in so many ways, to grow closer to one another.”

“The ecumenism of the martyrs is a summons to us, here and now, to advance on the path to ever greater unity.”

Pope Francis noted that “from the beginning” the Ethiopian Church has been a Church of martyrs.

The Ethiopian Orthodox Tewahedo Church is the largest of the Oriental Orthodox Churches, which rejected the definitions of the Council of Chalcedon in AD 451.

“Today too, you are witnessing a devastating outbreak of violence against Christians and other minorities in the Middle East and in some parts of Africa,” Pope Francis said.

“We cannot fail, yet again, to implore those who govern the world’s political and economic life to promote a peaceful coexistence based on reciprocal respect and reconciliation, mutual forgiveness and solidarity.”