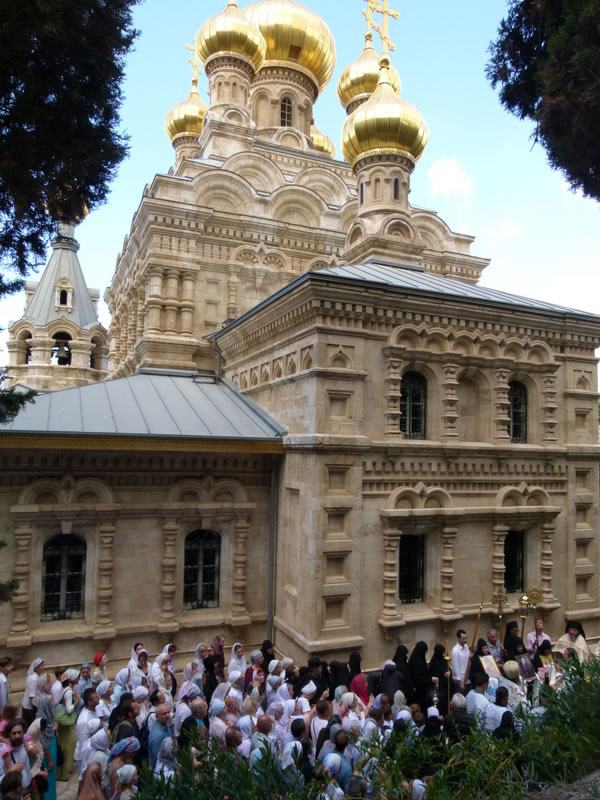 Officiating was His Eminence Archbishop Mark of Berlin and Germany of the Russian Orthodox Church Outside of Russia, Overseer of the Russian Ecclesiastical Mission in Jerusalem. He was joined by Archimandrite Roman (Krassovsky), Chief of the REM, as well as visiting clergymen.

At the end of Liturgy, His Beatitude Patriarch Theophilos III of Jerusalem and All Palestine, accompanied by the Secretary of the Holy Synod, His Eminence Archbishop Aristarchos. In his archpastoral sermon, His Beatitude discussed the Gospel account of St Mary, calling upon the worshipers to emulate her Apostolic example, and to pray in earnest for peace in the Holy Land and in Ukraine.

Afterwards, following a trapeza luncheon, His Beatitude visited the residence of Archbishop Mark, where they discussed the aid that the Jerusalem Patriarchate is providing to the refugees of Gaza. One of the Church’s monasteries, for instance, provided accommodations for over 1,000 people. His Beatitude then asked for prayers for his flock.

The evening before, Archbishop Mark performed the tonsure of a novice of the Orthodox Community in Bethany, Olga (Bobkova), naming her in honor of St Anna, Princess of Kashin.