Becoming “Fellow Citizens of the Saints” 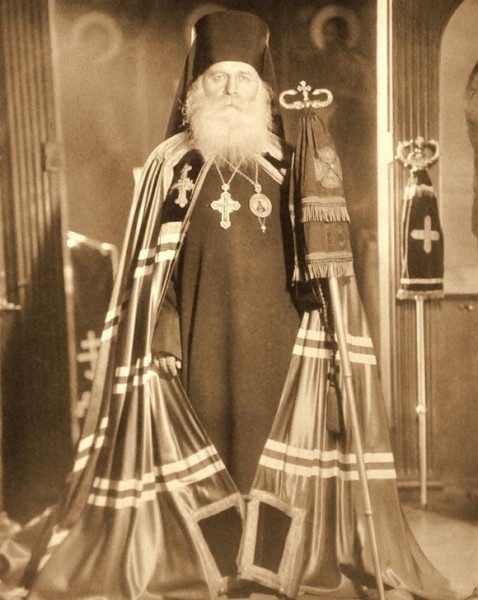 Holy   Apostle Paul, addressing the Ephesians, whom he calls “the saints   and the faithful in Christ Jesus,” tells them that after they   became Christians, they “are no more strangers and foreigners, but   fellow citizens with the saints, and of the household of God; and are   built upon the foundation of the apostles and prophets, Jesus Christ   himself being the chief corner stone; in whom all the building fitly   framed together groweth unto a holy temple in the Lord: in whom ye also   are builded together for a habitation of God through the Spirit” (Ephesians   2, 19-22).

This lesson from the great preacher of our holy faith relates to all   of mankind, including us sinners, and is the same for us all: monks,   laypersons and priests, and to bishops, the educated and uneducated,   the poor, the rich, to men and women, the aged and the young, in other   words, to all of humanity.

Each   of us, passing through this brief earthly life, must labor over ourselves,   to make ourselves an abode of the Holy Spirit. We must all pass through   the gates of death and afterwards inherit either eternal blissful life,   a life of love and joy, or eternal and endless suffering and sorrow.

So   that we wouldn’t think that we just have no theological education,   or we were not quite prepared to perceive the mysteries of spiritual   knowledge, or we did not know how to orient our hearts in order to become   fellow citizens of the saints and righteous of God, the Holy Church   on the same day after this Apostolic reading offers us the passage from   the Gospel on how one must and can approach God. This is shown in the   example of the simple woman, whose name is not even given to us.

The   Holy Gospel tells us about two events during the earthly life of our   Savior—the healing of the bleeding woman and the resurrection of the   daughter of Jairus.

On   the basis of the remarkable terseness with which the brief Gospel accounts   of the life of our Lord Jesus Christ are related to us, we can reconstruct   the full picture:

The   healing of the bleeding woman occurred after renown of the teachings   of Jesus Christ and the great miracles He performed had spread throughout   Judea, and when a multitude of people would follow Him wherever He went,   seen as a great preacher and miracle-worker. 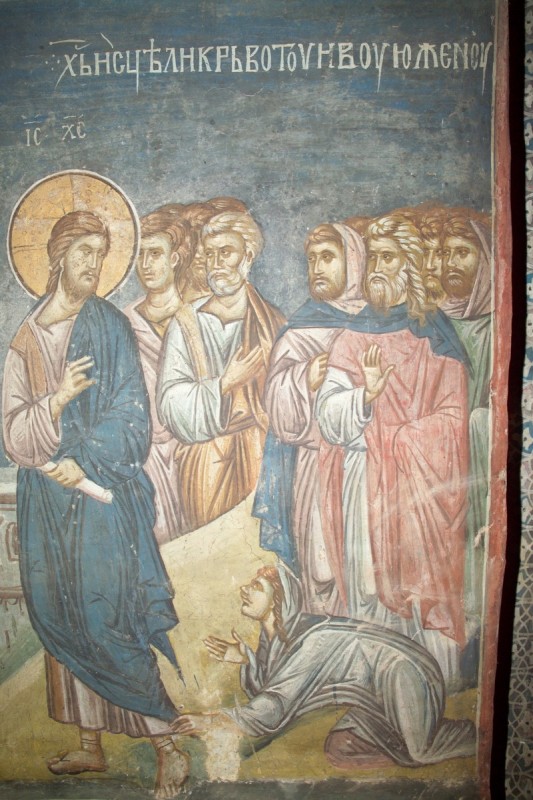 The   Lord had just returned to Judea from Gadara, after He had driven out   the legion of demons from the terrible possessed man and into a herd   of swine, which drowned in the sea, in punishment of the local population   for violating Mosaic Law. After “the whole multitude of the country   of the Gadarenes round about besought him to depart from them; for they   were taken with great fear” (Luke 8:37). Apparently, these people   lived in lawlessness and feared that the Lord would denounce them in   other sins, and would destroy their sinful pleasures.

But   they did not treat the Lord thus in Judea. “And it came to pass, that,   when Jesus was returned, the people gladly received him: for they were   all waiting for him. And, behold, there came a man named Jairus, and   he was a ruler of the synagogue; and he fell down at Jesus’ feet, and   besought him that he would come into his house: for he had one only   daughter, about twelve years of age, and she lay a-dying” (Luke 8:41-42).

When   the Lord went to the house of Jairus, an event occurred which we can   practically imagine before our eyes. A crowd followed the Lord, unceremoniously   jostling Him. This was mainly a group of curious people striving to   take a closer look at this famous Man, or to hear something from Him,   or to witness a miracle, and the crowd was unmerciful in its curiosity.   Something similar, incidentally, would later happen to St John of Kronstadt;   wherever he went, people rushed to him so that he could have been crushed.   The police would restrain the crowds from St John, but the Lord, of   course, had no such police escort and so the people clamored to Him,   pushing one another closer for the mere chance to squeeze closer to   Him. The Lord, apparently, moved slowly behind Jairus, humbly enduring   the crush of the crowd.

But   suddenly, He stopped and asked with authority: “Who touched me?”   The Lord seemingly said this with such severity that silence overcame   the crowd. Everyone stopped in their tracks. Those who pressed Him “all   denied him.” Then Peter and the other disciples, hoping the relieve   the fear and bewilderment of the crowd, said with a hint of rebuke:   “Master, the multitude throng thee and press thee, and sayest thou,   Who touched me?” The Lord, in His Divine Omniscience knew who touched   Him and why, but He wished that the transgressor of this blessed touch   would bear witness herself to the universe, how and why she touched   the Lord and became then for all of mankind a teacher of how one must   approach the Lord.

“Somebody   hath touched me: for I perceive that virtue is gone out of me,” answered   the Lord to His puzzled disciples. Here, in close proximity to the Lord,   was this blessed woman. Seeing that she could not hide, and sensing   that the Lord was referring to her, and was addressing her, “she came   trembling, and falling down before him, she declared unto him before   all the people for what cause she had touched him, and how she was healed   immediately” (Luke 8:47).

She   declared to the world, and to us sinners, how over the course of twelve   years she suffered a terrible malady, constant bleeding, how she spent   her own fortune on physicians who gave her no relief, how being sick,   she also fell into poverty. But the news reached her ears, that the   One Who releases the suffering into freedom had come to earth, and she   believed with all her heart that He was the True God, Omnipotent, that   He could do for her all that her doctors could not, that He was the   Omniscient God, filled with empathetic love, that she was unworthy to   come into direct contact with Him and speak to Him in order to receive   healing from Him, that it was enough to merely touch the edge of His   garment, for everything that was with Him, everything He had, was illuminated   with all-powerful divine grace. And so she exerted great effort to make   her way through the crowd surrounding Him, and with prayerful piety   touched the edge of His cloak—and was instantly healed. According   to Old Testament law (Leviticus 15:25), a woman with such an affliction   was considered impure and could not touch anyone. But this woman’s   touching of the raiment of Christ was not common, it was imbued with   prayer.

Proof   of the fact that this woman had just such thoughts when she confessed   before the Lord and was healed, are contained in the Lord’s words:   “Daughter, be of good comfort: thy faith hath saved thee; go in peace”   (Luke 8:48).

This   was the only woman who was deemed worthy for the Lord to call her “daughter.”   To others, the Lord said “O woman, great is thy faith” (Matthew   15:28). In two other instances, the Lord called women daughters, but   differently: after healing the woman hunch-backed for eighteen years   in the Temple, whom He called “daughter of Abraham” (Luke 13:16),   and when He was being led to His crucifixion, He saw the women of Jerusalem   weeping over Him, and he addressed them with the words “Daughters   of Jerusalem, weep not for me, but weep for yourselves, and for your   children” (Luke 23:26). This blessed woman earned the name of “daughter”   from the Lord. In general, during the Lord’s time on earth, He called   people “children” only in those instances when He drew back the   curtain of His Divinity. And so, He told the man sick of the palsy “Son,   be of good cheer; thy sins be forgiven thee” (Matthew 9:2), and then   to the bewilderment of those within earshot, explained that He is the   One who has the power to release sin, that is, God; He then called Zacchaeus   “also a son of Abraham” after Zacchaeus had confessed his faith   and his repentance (Luke 19:8); before His sufferings, speaking to His   disciples about His Divinity, the Lord said “Little children! Yet   a little while I am with you” (John 13:33). When the Lord, following   His Resurrection, appeared to His disciples as God, He directly calls   them His children: “Children, have ye any meat?”

In   this way, the Lord, calling the woman He healed “daughter,”   shows that she indeed possessed the saving faith, for, as Holy Evangelist   John the Theologian bears witness, “But as many as received him, to   them gave he power to become the sons of God, even to them that believe   on his name” (John 1:12).

The   Lord moreover confirmed this later in His words to the woman: “thy   faith hath saved thee; go in peace.” The Lord did not say what is   accepted in the St James Bible version: “thy faith hath made thee   whole,” but something far greater: “Thy faith hath saved thee,”   that is, her faith emancipated her from sickness and placed her upon   the path which would lead her to eternal life. This woman, then, became   the universal teacher of saving faith, exhibiting one example of its   manifestation.

Vladyka   Anthony (Khrapovitsky) of blessed memory taught that the saving faith   must be a faith of purification and active love:

“In   order to heave the saving faith in Christ, one must unilaterally reject   the passions of this world, to develop within oneself and maintain love,   to recognize the Bearer of higher love to be the true and Inoriginate   Son of God, and through this recognition to once again lift one’s love   into eternity.”

This   is the very life for which we must become “fellow citizens of the   saints.”

Death is not the Annihilation of Being: On the Saturday of Souls before Pentecost

This is why prayer for the dead, who are alive “over there,” in the sphere of existence yet…