Source: Notes on Arab Orthodoxy
The Church realizes that holiness is not something exceptional or incidental. It is not a supernatural event. Rather, it is part of her mission and calling in the world.
Fr. Georges Massouh | 18 June 2014 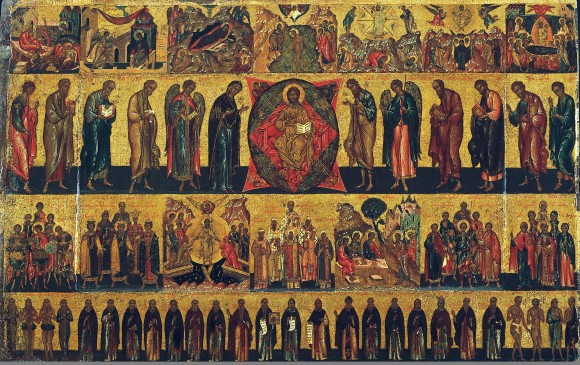 The Bible affirms that God alone is holy. However, it calls each person to attain holiness in his life: “as He who called you is holy, you also be holy in all your conduct, 16 because it is written, ‘Be holy, for I am holy'” (1 Peter 1:15-16). Peter himself goes even further than this when he calls believers to “become partakers of the divine nature” (2 Peter 1:4).

Man’s participation in the divine nature was not possible before the Word of God was incarnate and became man. Because of Jesus Christ, God who became man, it became possible for man, according to patristic tradition, to become god by grace, just as the eternal Word of God truly became man.

If holiness is attributed to human beings, this does not mean that they were infalliable from sin or were exempt from error. Rather, it is attributed to them because they realized that they are sinners and so they strove with all the power and strength toward repentance. A saint is none other than the one who admits his sins and decides to depart from them and follow along the path of repentance. This is why in his letters the Apostle Paul addresses living believers in general, calling them saints, in hope. Holiness is constant daily struggle, despite many falls, in order to live the good things to come in our present world.

Thus the Church realizes that holiness is not something exceptional or incidental. It is not a supernatural event. Rather, it is part of her mission and calling in the world. The saints are the shining proof of the ability of every person, no matter what sins and transgressions he has committed, to become a saint through the support of God’s grace. The chain of saints includes adultresses, thieves, murderers and others who have committed great sins but their repentance was great to the point of erasing everything they had previously committed. The saints, then, are living examples that keep the faithful from despairing of God’s grace, examples of how they, like those before them, can themselves also become saints.

The usefulness of the lives of saints is in taking them as a model for those who struggle today to attain what they attained.

If holiness is something that is not incidental to the Church, then why do people treat the announcement of someone’s sainthood as thought it were an exceptional event? Why have we come to be surprised that there are saints in our contemporary world? Why has holiness become the monopoly of a few whom the Church announces to be saints when the expression “the saints” was applied to all who belong to the Church?

On the first Sunday after the Feast of Pentecost, the feast of the Holy Spirit resting on the assembly of the believers, the Orthodox Church celebrates the Feast of All Saints. This is in order to demonstrate the effectiveness of the work of the Holy Spirit, the Spirit of Holiness, in the faithful. The fruit of Pentecost is the holiness that the Spirit gives to those who walk in His ways.

It is good for the faithful to celebrate the saints but it is better for the announcement of sainthood to be a stimulus for all the people to become themselves a people of living saints. If one out of a million people reaches sainthood, it is an occasion that calls for reflection on the state of the million who are not saints more than it calls for taking pride in the one saint alone. How can be faithful be convinced that holiness is something that concerns them as well?