Rebels Agree to Surrender Weapons in 4 Towns in Syria 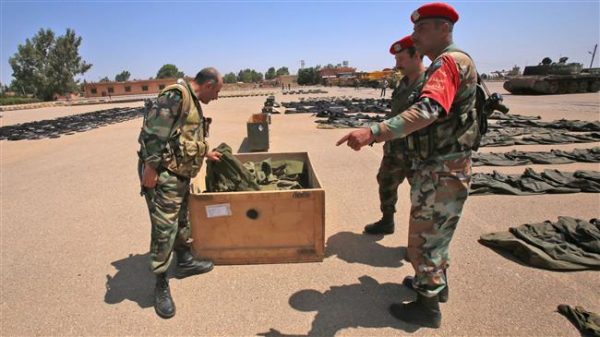 Syrian army soldiers display weapons confiscated from militants at a military base in the town of Izra', Dara'a Province, July 4, 2018. (Photo by AFP)

DAMASCUS (Xinhua) — Rebels in four towns in Syria’s southern province of Daraa have agreed to hand over their weapons to the Syrian army, state news agency SANA reported.

This was part of a deal between the government and the rebels in the towns of Samlin, Kafar Shams, Kafar Nasej and Akraba, the report said.

The deal followed a similar one reached between the army and the rebels in the eastern countryside of Daraa, which has been back under the government control.

On June 19, the Syrian army unleashed a wide-scale offensive to dislodge the rebels in Daraa due to the strategic importance of that province near the Jordanian border.

The Syrian army has captured large swathes of territories in Daraa during the recent campaign, either through achieving reconciliation or by military force.

The rebels in the western countryside of Daraa have rejected the proposals which are largely backed by Russia.

Meanwhile, activists said the people in the northern and western countryside of Daraa have formed a delegation to negotiate about the future of their areas with Russia.

They said a protest erupted in the rebel-held town of Inkhil in the northern countryside of Daraa on Tuesday, demanding the rebels of the al-Qaida-linked Nusra Front leave.

The Syrian Observatory for Human Rights said that 14 Syrian soldiers were killed Tuesday in the first confrontation with the Khalid Bin al-Walid group, which is allied with the Islamic State (IS) group in the western countryside of Daraa.

The UK-based watchdog group said the group targeted a gathering of Syrian soldiers with a booby-trapped car in the Zaizun base that was recaptured by the Syrian army in western Daraa over the past 36 hours.

Daraa has a symbolic significance as it was the birthplace of the Syrian war that erupted in 2011. Securing it will be a big victory for the Syrian army both symbolically and militarily as the rebels have used the Jordanian border to bring in arms and fighters throughout the war.