Source: Agenda.ge
Natalya Mihailova | 27 April 2015
Georgian high officials, representatives of the Georgian Orthodox Church and hundreds of worshipers have gathered to celebrate the completion of the Iveria Holy Virgin Mary Church construction on the Makhata hill in Tbilisi. 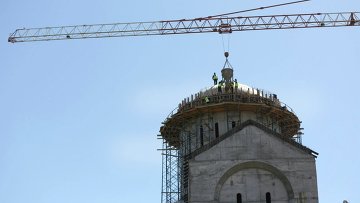 Prime Minister Irakli Garibashvili attended the ceremony and said the cathedral would become a symbol of the country’s unification.

“This is a miraculous day. This church was built by the Georgian people with the Patriarch’s initiation and blessing. I believe this church will become a symbol of unification,’’ he said.

Tbilisi Mayor Davit Narmania announced a new road would soon be built to connect the Iveria Holy Virgin Mary Church on Makhata hill and the Holy Trinity Cathedral of Tbilisi, commonly known as Sameba. Sameba is the main cathedral of the Georgian Orthodox Church, the third-tallest Eastern Orthodox cathedral in the world and one of the largest religious buildings in the South Caucasus.

Meanwhile, construction of the cathedral at Makhata hill started in 2012, while the site was blessed for the new church in 2011. The cathedral was built by the joint efforts of all Georgia and Georgians living abroad.

Paata Burtchuladze, a famous Georgian operatic bass vocalist, was one of the main organisers of the construction, as well as all others who contributed to the construction.

Burchuladze said most of the basic work was completed today but some other details still needed to be added to the new cathedral.