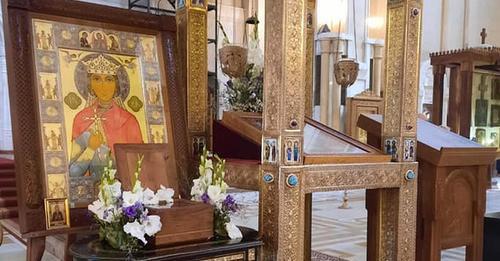 Within the history of the Georgian Orthodox Church, there have been several difficulties faced by the Georgian people from nearly constant invasions and internecine wars, from the Zoroastrian Persian Empire to the atheist Soviet Union. This has made it difficult for the Georgian Church to conduct evangelization on a large-scale. With this being said, there have been notable historical examples of the evangelization of foreigners within Georgia, such as with St. Abo of Tbilisi, and this Gospel commandment to evangelize all peoples within Georgia has continued into the present day.[1] This can be seen most of all with the English language Orthodox community of Tbilisi (the capital of Georgia), which was established in 2014 through the initiative of three English-speaking converts to Orthodoxy and Fr. Joseph Fester. Before the start of the English language community, the liturgical languages found within Georgia were Georgian, Church Slavonic, Greek, and Aramaic, because of the Patriarch’s desire to have each Orthodox minority hear the Liturgy in its native language. From 2014 to 2016, Fr. Fester was residing in Tbilisi, and received a personal blessing from Patriarch Ilia II to begin a community that would meet once a month on Saturday at the Blue Monastery (dedicated to St. Andrew the First-Called) for Divine Liturgy. Because Fr. Fester moved from Tbilisi to Thailand in 2016, the English Orthodox Community has been led since 2016 by Fr. Archil, who is an English-speaking Georgian priest, and the pastor of the newly built Church of St. George in the Digomi area of Tbilisi. This Church started its construction in 2016, and it was planned that it would take a minimum of five years to construct the Church due to problems with financing. The only government funding for the Church came from the city of Tbilisi, which provided $3,000 annually for the construction of the Church, while the rest of the funding would have to come from private donations. This would be especially difficult within Georgia, because of the bleak economic conditions in that nation, where the average monthly salary is less than $400 a month and a there is poverty rate of over twenty-one percent.[2][3] However, through the blessing of God, the Church was constructed within one and a half years, and this fast construction time can be attributed to the large amount of support from both the English-speaking Orthodox community within and outside Georgia, and the homeland/diaspora Georgian community that provided funding especially in critical times during the church’s construction. With this being said, the interior of the Church is still being painted with iconography, and construction is continuing on additions to the second building on the Church property that will be used in the future for fellowship, an iconography studio, and Sunday school for children. If you would like to help support the continued construction of the Church of St. George, you can donate through the church’s fundraising page.

The English language community presently consists of about five to ten members who consistently attend the English language services offered twice a month, the chants being done according to the Byzantine tradition using resources provided by St. Anthony’s Monastery in Florence, Arizona.[4] Every other Friday at 4 pm, English Vespers is served by the foreign members of the community, and afterwards confessions are heard by Fr. Archil. On Saturday at 9:15 am, the Divine Liturgy is offered, and afterwards there is fellowship in an adjacent building among members of the community who provide a traditional Georgian feast (supra) with various toasts offered by the toastmaster in honor of the Church, the Mother of God, for those who have departed, and many others. Videos of the Divine Liturgy and fellowship (supra) of the Tbilisi English Orthodox community can be seen here:

This inclusion of fellowship is not commonly found within the Churches in Tbilisi; the closeness of the community can be attributed to the fellowship conducted together after each Liturgy, along with the pastoral leadership of Fr. Archil. The members are also highly diverse; presently the core members of the community come from the United States, Canada, United Kingdom, South Africa, Australia, and New Zealand—are all converts to the Orthodox Christian faith. In addition to this, members of this community reside not only within Tbilisi, but also in other regions of Georgia (Batumi, Gori, etc) and will travel just to attend Liturgy in their own native tongue.

Lastly, the community has recently started to make pilgrimages to the numerous Orthodox holy sites within Georgia. A recent pilgrimage was made to the Holy Trinity Cathedral to venerate the relics of holy Great Martyr Queen Ketevan, which came to Georgia last month from India.[5] Overall, the founding of this English language Orthodox Community within the nation of Georgia has been a positive development, and the community will steadily continue to grow through God’s blessing. You can read about future developments in the Georgian Orthodox Church and news from this community on the following Facebook groups/pages: