Source: ROCOR
Natalya Mihailova | 17 June 2015
On June 14, 2015, the 2 nd Sunday of Pentecost and feast day of All Russian Saints, His Holiness Patriarch Kirill of Moscow and All Russia led the 25 th anniversary celebrations of the canonization in Russia of St John of Kronstadt. The event was held in the town of Sura, Pinezhsk region of Archangelsk oblast, the birthplace of the saint. 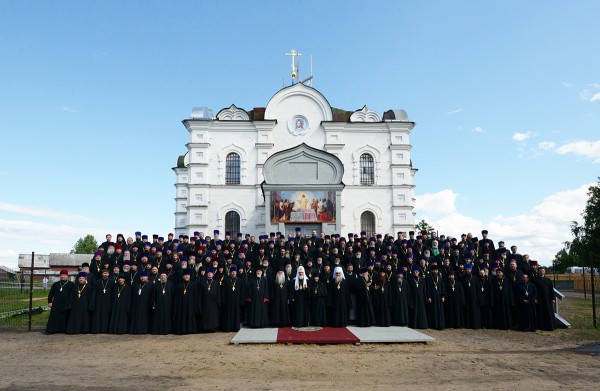 The Patriarch officiated at Divine Liturgy in Dormition Church at St John the Theologian Convent, founded in 1899 at the initiative of St John of Kronstadt.

Singing at the service was “Artos” Choir under the direction of Margarite Krasova from St Petersburg.
After the augmented litany, His Holiness prayed for peace in Ukraine.

The celebration in Sura drew representatives of 138 dioceses of Russia, the near and far abroad, including Australia, Brazil, Germany, Italy, Iran, Canada, Norway, Pakiston, the USA and Chile, and bishops and clergymen, members of the so-called “family of St John of Kronstadt” from 22 nations. This network is a series of “sister” churches, parishes and social establishments dedicated to the memory of Righteous John of Kronstadt, bound by common prayer and the desire to help and support each other. It was formed in 2009 to mark the 100 th anniversary of the saint’s death.