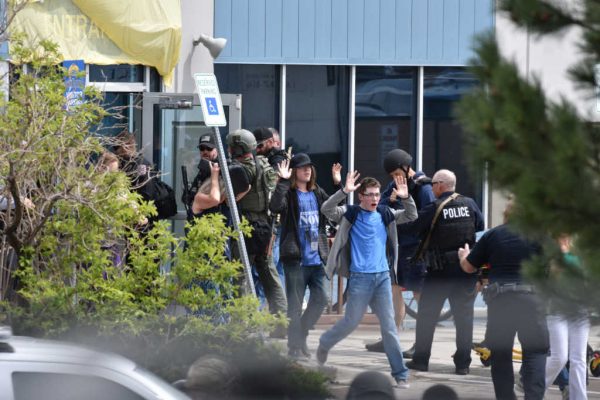 A high school senior and aspiring Marine was one of the brave students who put himself in the firing line to disarm a school shooter in Colorado Tuesday.

Brendan Bialy attends the STEM School Highlands Ranch, which is just minutes away from Columbine High School — the scene of a deadly 1999 mass shooting.

Two suspects, an 18-year-old man and a female juvenile, were detained by police following the latest shooting at the Denver school, in which one teenager was killed and eight others were injured.

Brendan’s father, Brad, confirmed that his son among the group of heroes who disarmed one of the gunmen.

“We are deeply saddened for the victims, families, friends, and community on this tragic day,” the Bialy family said in a statement, according to NBC News. “We’d like to commend the immediate response of law enforcement and assure all we are strong with the love of our families, community, friends, and every one sending concern, wishes, and strength. We will persevere.”

Brendan’s father added that his son intends to join the Marine Corps upon graduation.

“We heard like really big bangs which I assume are gunshots,” student Mia Bash told CBS News of the horrific incident.

“Everyone was sort of spread out across the room just hiding,” added another pupil.

The Douglas County Sheriff’s Office praised its police officers for their rapid response to the incident.

“I have to believe that the quick response of the officers that got inside that school helped save lives,” said Sheriff Tony Spurlock, according to CNN.

In a press conference early Wednesday, Spurlock noted that officers arrived at the school “within two mintues” of getting the call and “immediately engaged the suspects” while helping terrified children escape the vicinity.

Also speaking at the press conference, District Attorney George Brauchler requested that the media “adopt a ‘no notoriety’ approach” with regards to the shooters.

“Focus instead on the innocent victims, on this crime and on this investigation itself,” he said.

Kendrick Castillo, 18, has been confirmed as the sole fatality in the shooting.

Please keep the families affected by this tragedy in your prayers.