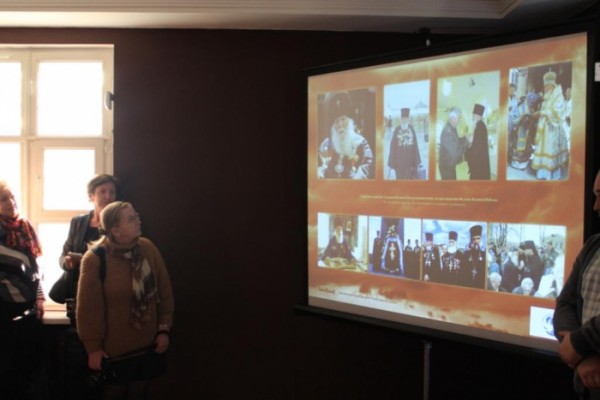 The exhibition presents the archival documents, photographs which used to belong to Patriarchs Sergius and Alexy I. Many documents have not been published before. This is the first time they have been made available to the general public as they were declassified just a few years ago. This makes the exhibition unique. It tells visitors about the activities of the Russian Orthodox Church during the war and its role in the international arena in the postwar years.

“Before the war atheism was the main doctrine in the Soviet Union. Hitler also paid much attention to religious issues as he was planning to hold the occupied countries subjugated. On the first day of the war Patriarch Sergius typed a message calling on people to stand up to defend the homeland and sent it to all parishes,” Director of the Russian Science and Culture Center in Brest Yelena Maslova said.

It is symbolic that the exhibition has been organized in 2015. This year marks 70th anniversary of the Great Victory and the 1000th anniversary of the demise of St. Prince Vladimir. “Hence we had the idea to show the role of Orthodoxy in the period of the Second World war. This topic is still not well researched,” added Yelena Maslova.

“We know little about this common page in the history of Russians and Belarusians. The exhibition opens new facets of the history of the Great Patriotic War. Unselfish patriotic serving to the Church greatly contributed to the Victory,” Consul General of the Russian Federation in Brest Igor Konyakin said.

The exhibition in Brest will run until mid-October.