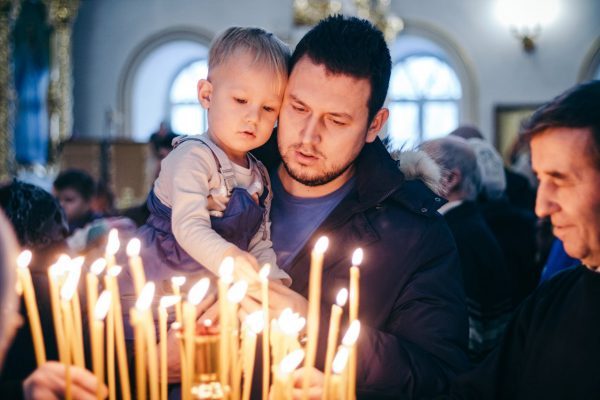 Every week I meet with our catechumens, inquirers, and other faithful for a time of instruction, which includes a Q & A session.   Lately we were talking about how Christians were to live differently than the world around them, and one of the catechumens asked the excellent question, “How do we teach this to our young people?” The answer: by creating a Christian counter-culture.

Culture is one of those odd words. It usually conjures up images of sophisticated people in evening finery drinking white wine while listening to classical music. To be “cultured” is to conform to that stereotype; to be “uncultured” is to lack such sophistication. But culture, as I am using the word, is something different.

In fact everyone has culture whatever their taste in music, dress, and wine, because “culture” is just another word for how everyone lives and the values to which they subscribe. North American culture, for example, says that one speaks when spoken to, says “Excuse me” after sneezing on someone, eats peas with a knife and fork and not with one’s hands, but eats pizza with one’s hands, and not necessarily with a knife and fork. For us North Americans, this is just the way we live. We don’t often think about our cultural norms; we simply conform to them reflexively. Indeed, if one has to think about something, it is not really a part of one’s culture. Real culture is automatic; it is our almost unconscious conformity to The Way Things Are Done.

These rules are not written down anywhere, but are a part of our unwritten tradition, taught to us by our parents and grandparents. We learn our culture by watching how they eat, talk, interact, by listening to their views on moral basics, and then by imitating them. That is how culture is transmitted down the generations: within a family.

Our modern North American culture is, I submit, becoming increasingly diseased, and the things we once valued are being overturned and replaced with their opposites. The obvious cultural reversals are the moral ones—in many places we now regard those who reject homosexual practice or abortion with disdain, if not open hostility. This is a radical volte-face from our earlier cultural norms. The spreading acceptance of the notion that gender is self-chosen is another example of cultural reversal. Traditional Christian faith is (in my northern neck of the woods anyway) increasingly under assault, and Christians now have to navigate situations with some finesse. Should they speak up or keep quiet? Should they protest openly or keep their head down? Sometimes the proper balance between silence and speaking is hard to find, and this political difficulty witnesses to our changed cultural environment.

This is why I suggested to my catechumens that we need a counter-culture, a Christian alternative to the present secular one. We must teach our children (and our new converts) that living as a disciple of Jesus in North America now means living dramatically differently from many of those around us. We inhabit a different moral universe, much as the Christians of the early centuries inhabited a different moral universe than did their pagan neighbours. Some of the things we admire and applaud are condemned and stigmatized by the world, and some of the things we abominate and reject are admired and applauded by the world. There is, of course, some overlap in things that both Christians and worldlings admire or reject, but this common ground seems to be shrinking. That is why we need to create, sustain, and nurture an alternative culture.

As said above, any culture—including this Christian counter-culture—is created and transmitted in and by families. And by “family” I mean not only our domestic and biological families, but especially by our parish family. The Church is our true family, and to create and sustain a Christian counter-culture in our children, the contributions of both Church and biological family are required. Learning takes place at the intersection and convergence of these two families: it is only when what mom and dad live and teach at home finds confirmation in what is lived and taught in church that children can really come to believe and internalize it.

My point here is that the parish church must become our family. Very often this is not the case. For many people their only real family is their biological one, and the parish church is the place where they go on Sunday (maybe) to attend Liturgy and (horrible phrase!) “to have their religious needs met”.   This can hardly be overstated: if the parish church is mostly a place where the family goes to reinforce their ethnic identity or to hear inspiring sermons, it will not be enough to create an effective counter-culture. If the children regard the priest and parishioners as “them” (i.e. as distinct from their family) and not as “us” (i.e. as their family), it will be difficult for a counter-culture to be created or transmitted. It is only as they consider the church to be their family, their tribe, and the bestower of their identity that children have a hope of internalizing the Church’s faith in a way that will withstand the onslaught from the culture of the world.

I sometimes wonder (in moments of pandemic-inspired gloom) if the North American church is really up for it. I remember one bishop (who shall remain nameless) enthusing about “our beautiful religion”. If the parishes focus upon ethnic identity or upon morality or upon “our beautiful religion”, we are lost. No real Christian, I submit, regards his or her faith as “their beautiful religion”. They are not thinking of their religion; they are thinking of Christ. Our faith, with its counter-cultural opposition to the secular world, is not a choice we make; it is who we are. If culture is real, one is hardly aware of it, for culture is simply the lens through which we experience the world. It is the same with our Christian counter-culture: if it is real, we cannot imagine living any other way. Faithfulness to Christ is hardly a choice any more; it is just who we are. As St. Peter once said, “Lord, where else could we go? You only have the words of eternal life” (John 6:68).