But, What about Communion in a Time of Illness?

Source: OrthoCuban
That same question came up when the HIV virus was first identified as causing AIDS. It comes up in the USA every time that something starts making the rounds. And, it keeps coming back despite the fact, and I do mean fact, that there is no record of a congregation getting ill as a result of communion. Believe me, were the common cup to be a danger, we would have epidemiologists breathing down the neck of the Church claiming that we did not care about people.
Priest Ernesto Obregon | 07 September 2009

Yep, sure enough, the question comes up again. But, Father, should we not change our method of giving the Lord’s Body and Blood since the swine flu is going around?

That same question came up when the HIV virus was first identified as causing AIDS. It comes up in the USA every time that something starts making the rounds. And, it keeps coming back despite the fact, and I do mean fact, that there is no record of a congregation getting ill as a result of communion. Believe me, were the common cup to be a danger, we would have epidemiologists breathing down the neck of the Church claiming that we did not care about people. Were there any, even rumor, that disease had gotten passed on through the common cup, the news media would be gleefully going around interviewing denominational leaders about their lack of care for their flock. And were priests to have a higher morbidity or mortality rate because we drain the common cup at the end of the Liturgy, you can be sure that there would be bishops altering the rules for the good of the clergy. 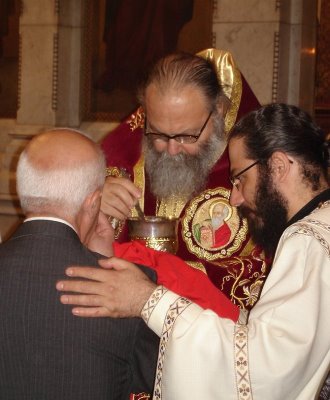 But, there is no such proof. And there are no Health Department warnings. And there are no news media running around interviewing denominational leaders about any such possibility. And there are no bishops worried about their clergy getting sick or dying from draining the common cup. Can you hear the frustration in my voice as I type this? Yet, despite such an overwhelming lack of proof, despite the lack of  ”concern” of the news media or the health department, every time some contagious disease starts making the round, there never fails to be the church member or parish council person who is convinced that we need to change the historic method of the Lord’s Supper to something more sanitary. Are they then saying that the Eucharist is somewhat unsanitary? Well, they would never admit it, but it is there.

And, it does not matter how much I will explain the above medical facts. Nor will it matter that I will point out that historically one cannot find any problem with the common cup. There will be people in modern America who will refuse to listen to any of those facts, and will instead quit receiving the Body and Blood of Christ for a while out of unfounded fear. Worse, there will be those who will push, and hard, for a “temporary” change to the mode of administration of the sacrament because it is better to be over-cautious. All this not only without proof, but with the positive experience of 2,000 years of Church history and many decades of modern medical history in various countries confirming the safety of the Eucharist.

And, so, I will again refuse to change the Church’s historic Tradition, not only because I have no bishop’s approval to do so but also because there is no historic or medical reason to do so. And, again, I will have to bear the brunt of the opprobium of some of the members. 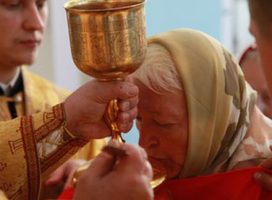 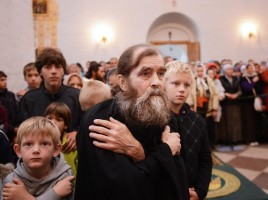 On the Need for Frequent Communion…
Natalya Mihailova

“Some persons say: ‘Look, we fulfill the commandment of the Lord, for we commune two or… 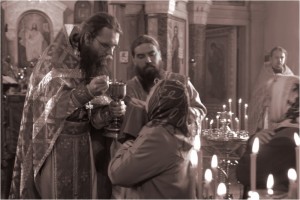