By Love and Loyalty to God Women Build Up the Church 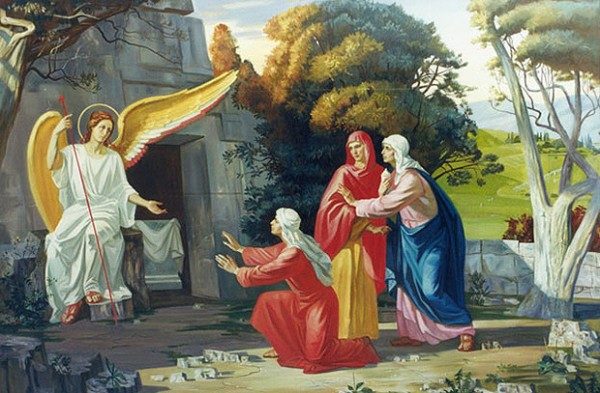 As we continue to celebrate the Resurrection of Christ, today we remember those who showed extraordinary love to our Savior during the last hours of His earthly life and after His death on the Cross.  There was the holy righteous Joseph of Arimathea, who went to Pilate and asked for the body of Jesus (after our Lord had died on the Cross) in order to bury Him in a new tomb.  There was Nicodemus, a secret disciple of Jesus, who assisted Joseph with the burial of our Savior.  There were the myrrh-bearing women, who followed our Savior during His entire earthly life, which consisted of preaching and missionary work.  They were not afraid to be recognized as the disciples of Christ, following Him up to the Cross on Golgotha, and after His death, hurrying to the tomb in order to anoint His body with an aromatic mixture of myrrh and aloes.  What did these women feel as they stood by the Cross of Jesus?  They saw that the One Whom they loved and believed in, on Whom they placed all their hopes, was leaving them forever.  They could hardly hope that He would rise from the dead and they could hardly realize that the suffering and death of our Savior would be the means by which the entire human race would be saved.

They felt immeasurable co-suffering love for our Savior while He was dying on the Cross.  They felt that they needed to help Him, even though there was nothing they could do.  When He died, these women, who were filled with sorrow, could only think about what else they could do for Jesus.  They could only go to His tomb where they could weep and, perhaps, if someone could be found who would roll away the stone from the entrance to the tomb, they could anoint His body with aromatics.  When they came to the tomb, they saw that the stone had been rolled away and the body of the Man Whom they loved and believed in was not there.  It was namely to them, who came to the tomb of Jesus before anyone else, even before the sun rose, that the great mystery of the Resurrection was first revealed.

The Gospel is silent about where the Mother of God was at that moment, but the holy Church, through the mouth of St. Gregory Palamas, proclaims that the Mother of God accompanied the myrrh-bearing women when they came to the tomb, and she was among those who first heard the news about the Resurrection of Christ, just as she was the first to hear the news of His incarnation, that from her would be born the One Who would become the Savior of the world.

The myrrh-bearing women:  these are the women who, by their love, labor and loyalty, have built up the Church of Christ over the centuries, even up to the present time.  The Lord placed the apostolic ministry upon men, on His disciples.  On the day of Pentecost they received a special charisma, a special gift of grace, which helped them to boldly preach the Risen Christ. This gift of grace gave them the  power to be hierarchs and priests and to appoint other clergy for the entire Church, as well as gave them the strength to go throughout all the ends of the earth in order to preach the Risen Christ.  The Lord entrusted them with apostolic ministry and, subsequently, their successors — always men — the Lord entrusted with the ministry to be bishops, priests and deacons, just as we heard today in the reading from the Acts of the Apostles, where it was also men who were appointed.  As it was then, so has it remained until today, and so will it be forever in the canonical Church which was founded by our Lord Jesus Christ.  However, there is that power of love of which only women are capable of, the power of loyalty and readiness to follow Christ, that was inherent in women throughout all centuries.  Without this sacrificial love the task and mission of salvation performed by the Church would not be possible.

The Lord did not entrust women with priestly and hierarchical ministry.  The entire Church hierarchy is made up of men, but women are not simply assistants to men in the structure of the Body of Christ, the Church.  Women help our Savior Himself.  Many women in the history of the Church shone not only with the spiritual struggle (podvig) for which the myrrh-bearing women were glorified, but also with the podvig of apostolic preaching.  There were women who were worthy to be called Equal-to-the-Apostles, because by their labors they were equivalent to the apostles:  such was St. Nina, Enlightener of Georgia, the Holy Empress Helen, and the Great Princess Olga, Equal-to-the-Apostles.  The apostolic podvig was carried out also by other women who were empresses and rulers, such as the Georgian empress Tamara (who is commemorated today**), as well as many ordinary women who built the church by their inconspicuous labors.  Today we see among our parishioners more women than men in the church.  Perhaps the men are spending more time working, perhaps they are more busy, or perhaps the fact is that the women have more love and loyalty than the men do.  And when men say that they are busy, tired, exhausted and that they have other things to take care of, the women are no less tired than the men and have not worked less hard than they did, yet the women find the strength to come to church, and not only to pray and to listen to the word of God, just like Mary, but to work for the church, just like Martha.  We have heard how the Lord accepted the ministry of both women, Martha and Mary:  one who took care of food for bodily needs, and the other who silently sat at the feet of Jesus and listened to His words.  Both one and the other ministry constitute the ministry of women, and both one and the other ministry, taken together, constitute the fullness of the ministry to which the Lord has called woman.

Above all, the Lord has called woman to be the creator of the little church, i.e., the family, to give life and upbringing to children, to be concerned with the continuance of the human race.  Just as without woman the human race cannot continue, in the same way, without her labors, prayers and love it would not be possible for life to continue in the Christian Church.

We glorify the myrrh-bearing women, and at the same time we offer thanksgiving to God for all women who come to church today, who fulfill the ministry of Martha and Mary, and who by their labors, prayer and love continue to build up the Body of Christ.

This sermon was given by Metropolitan Hilarion of Volokolamsk, Chairman of the Department for External Church Relations of the Moscow Patriarchate, on April 18, 2010.

**St. Tamara of Georgia is commemorated on the Sunday of the Myrrh-bearing women, as well as on her regular day of commemoration, which is May 1 (14).