Today is Sunday of the Myrrh-Bearing Women

On the second Sunday after Pascha, we commemorate the Holy Myrrh-bearing women.
Pravmir.com team | 03 May 2020 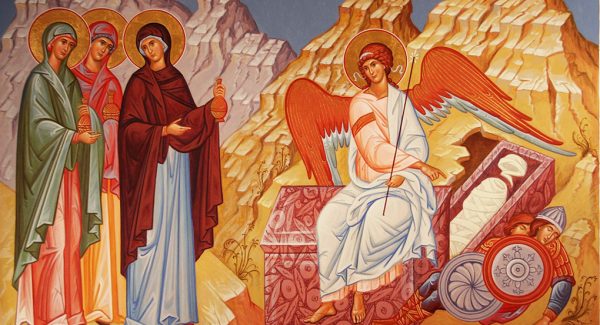 Hear the voice of gladness, O women; for I have trodden down rebellious Hades, and raised the world from corruption. Wherefore, hasten ye and proclaim the glad tidings to My beloved; for I desire that joy shall break forth thence upon My creation, whence first came forth sorrow.

—Orthros of the Feast, Tone 2

The Myrrh-bearing women are those women who followed the Lord, along with His Mother. They remained with her during the time of the saving Passion, and anointed the Lord’s body with myrrh. Joseph and Nikodemos asked for and received the Lord’s body from Pilate. They took it down from the Cross,wrapped it in linen cloths and spices, then they laid it in a tomb, and then they placed a great stone over the entrance of the tomb.

According to the Evangelist Matthew (27:57-61) Mary Magdalene and Mary the mother of James and Joses (Mark 15:40) were there sitting opposite the sepulchre, and they saw where He had been laid. This other Mary was the Mother of God. Not only were these present, but also many other women, as Saint Luke says (24:10).

Today the Church honors Saints Mary Magdalene (July 22), Mary the wife of Cleopas (May 23), Joanna (June 27), Salome, mother of the sons of Zebedee (August 3), Martha and Mary, sisters of Lazarus (June 4), and the Most Holy Theotokos and Ever-Virgin Mary, who was the stepmother of her husband Joseph’s sons James (October 23) and Joses (October 30). Today we also also remember Saint Joseph of Arimathea (July 31), who was a secret disciple (John 19:38), and Saint Nikodemos, who was a disciple by night (John 3:3; 19:38).