In call to Coptic Patriarch, Pope says they are united by blood of martyrdom

Source: The Catholic World Report
Natalya Mihailova | 12 December 2016
Vatican City, Dec 12, 2016 / 05:20 am (CNA/EWTN News).- The day after an explosion at the Coptic Orthodox cathedral in Cairo killed 25 people, mostly women and children, Pope Francis called the head of the Church to offer prayer, and to say they are united the blood of their martyrs. 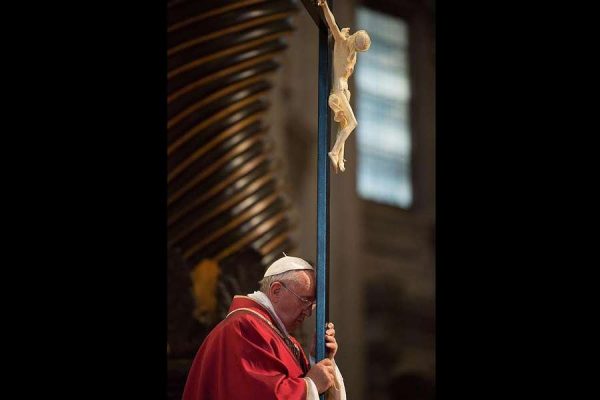 According to a Dec. 12 communique from the Vatican, Francis called His Holiness Pope Tawadros II earlier that morning to express his condolences and to assure of his closeness to the Patriarch and the entire Coptic community, “so hardly hit.”

On his part, Patriarch Tawadros II reminded Francis of the phrase “ecumenism of blood” he often uses to describe the global persecution of Christians, and which he also used during his 2013 meeting with the patriarch at the Vatican.

Pope Francis told the patriarch that “we are united in the blood of our martyrs,” and promised to pray for the community during his evening Mass for the feast of Our Lady of Guadalupe.

Tawadros II then thanked Pope Francis for his closeness and asked that he pray for the Coptic Church and for peace in Egypt, promising to send the Pope’s condolences to the entire Coptic community.

Francis’ phone call came the day after a Dec. 11 explosion at a chapel attached to St. Mark’s Coptic Orthodox Cathedral in Cairo killed at least 25 people and wounded dozens more.

The blast occurred around 10a.m. local time during a Liturgy at the seat of the Coptic Orthodox Church.

The Coptic Orthodox Church is an Oriental Orthodox Church, meaning it rejected the 451 Council of Chalcedon, and its followers were historically considered monophysites – those who believe Christ has only one nature – by Catholics and the Eastern Orthodox.

Christians in Egypt have long faced attacks from Islamist extremists, particularly since Egypt’s military ousted president Mohammed Morsi, of the Muslim Brotherhood, in 2013.

In February, four Coptic teenagers were found guilty of insulting Islam and sentenced to five years imprisonment, and two persons were killed in clashes outside St. Mark’s in April 2013.

In Libya, the Islamic State killed 21 Coptic Orthodox from Egypt in February 2015. In 2011, a bombing on a Coptic church in Alexandria killed 23.

Following his Sunday Angelus address, which took place just hours after the attack, Pope Francis prayed for the victims of the attack, and stated that “there is only one answer” to such violence: “faith in God  and unity in human and civil values.”