What Can We Learn from St. Andrew? 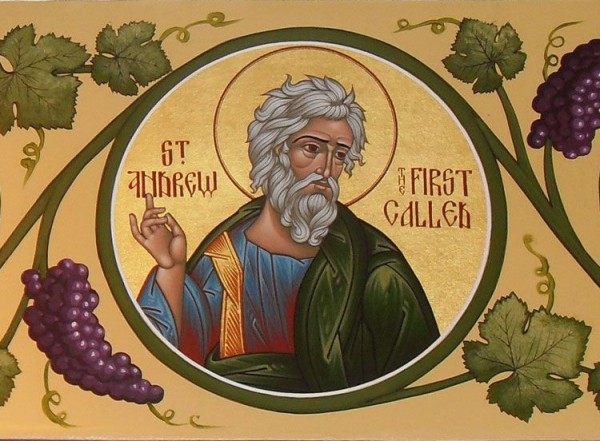 We are keeping today the feast of St Andrew, whom we call in the Orthodox Church “The First-Called”. We meet him for the first time in the Gospel on the banks of the River Jordan as disciple of St John the Baptist, together with him that later becameе St John the Divine, St John the Evangelist. Together with him, and hundreds of people he heard John, his teacher, his guide in the life of repentance proclaim Jesus who was coming towards them as the Lamb of God who takes upon Himself the sins of the world, declare Him to bе Him for whose sake he has come to the banks of Jordan to preach repentance, to turn the hearts of men towards their God, to call them to a new life of faithfulness.

And having heard that in Jesus this expectation, this longing had been fulfilled, Andrew, together with John, leaves his master, his teacher, the one who has turned his soul towards God, given him newness of life, he turns away from him, leaves him to follow Jesus, because this is why his master had come into the world: that he may proclaim Jesus in His coming, and then diminish for Christ to grow, before the eyes of men, in the lives of men, to be forgotten, because he was only the Forerunner.

To act as St Andrew did proved him to be a true disciple of his master; and how much each of us, all of us, we could learn in this act of greatness of heart, because it is hard to have found one who discloses to you what is precious in life, what is significant before God, who sets you on the way of repentance and of a new life, and then discover that he was nothing but a forerunner, nothing but one who was there to prepare the way of the Lord, and turn away from him, leave him to bring his message to others in order oneself to follow the Lord for whose sake he had preached, he had taught, he had been in the midst of men.

And John and Andrew leave him, and follow Christ who gradually leaves the banks of Jordan, going they do not know where; and Jesus stops and turns towards them because they are following Him, they pursue Him, having heard the message of John they will no longer let go of Him; and Jesus stops and says: what do you want of Me?.. And their answer is: we want to know where Thou dwellest… A simple phrase… And Jesus takes them with Him, and they spend a day with Him – but what do they discover? Is it only а wooden cabin, a hut of mud where Christ has been dwelling for a few days? One of the spiritual writers of our century says, No; they discovered two things. They discovered that the Annointed of God, the Christ, the Son of God incarnate lives indeed in a humble hut, that He Whose presence fills the Heaven which cannot contain Him, can dwell in a small cabin; but at the same time, listening to His word, looking into His face, plunging their gaze into His eyes they discover that before them there is One Whose dwelling is in Heaven, that they are in the presence of the living God Who has become man in order to save, to renew, to redeem, to live and to die for their sakes.

From that moment they become His disciples, they never will separate themselves from Him, they remain with Him, and their story merges with that of the other disciples – Peter, whom Andrew brings to Jesus, to whom he discloses Him Whom he has already discovered; John, who brings his brother, and all the other ones — Philip and Nathaniel, and everyone else.

And we meet him again in the Gospel, once, when, before the Crucifixion, fulfilling the prophecies of old, the Gentiles come to Jesus; and they turn to Philip and to Andrew because they recognise them as men of Galilee, of that region that was partly pagan, recognise in them people who will understand their language and understand also their desperate longing, because he has lived in their midst and he knows how poor they are and how their hearts long for fulfillment from Heaven, from God. And they them to Jesus. They are the first ones who opened the doors to the Gentiles, to bring them to the Lord. They prepared the way which later Paul will tread so gloriously, so conqueredly. Then, after the Crucifixion he shares with the other ones the agony, the horror of the death of Christ, and comes to life, no longer with the old, earthly life that has been his, but a new life, the life of the Risen Christ, the life of eternity in the resurrection of his blaster, his Saviour, his Lord and his God.

And when the Apostles dispersed to bring the good news to the whole world, he also goes to preach, and the story of his life brings him to the East and to the North, and we are told that he reaches as the ultimate point of his preaching the hills of Kiev in pagan Russia. And then he returns to die the death of martyrdom, in a manly, in аn unhesitating wау, dies, crucified as his Master.

How much we can learn from the life of this man, a simple man of Galilee who knew how to listen to a message, and to follow, first him who prepared the way of the Lord and then had the greatness of heart, the faithfulness to let go of the first hand that had brought him to the gates of eternity to follow Him Who was eternity, Life, God come into the world, and who throughout his life remained faithful, and was proof-prepared to pay the cost of this faithfulness, so that we may live, we may receive his message, we may also, through him, discover our Lord, and follow our only God, our only Lord, our only Saviour. Amen.

Most viewed articles
How to Read the Bible179
Words from St. Isaac of Syria145
Patriarch Kirill Encourages the Media to Report Proper and Adequate Information about the Church139
Since the Start of the Pandemic Moscow Priests Have Made Over 4,000 Visits to Patients with COVID-19100
Archbishop Peter of Chicago and Mid-America in an interview to Poltava Diocese’s press service reveals interesting moments in the life of St John (Maximovich)93
“Do Not Weep”92
Best Films of the Pokrov Film Festival Have Been Determined76
Christ the Life Giver7
Using Our Time Wisely to Cultivate the Seeds of Faith2
Most popular authors
Pravmir.com team408
Archpriest Lawrence Farley179
Archpriest Stephen Freeman145
Archpriest Peter Olsen92
Fr. Theodore Stylianopoulos7
Priest Luke A. Veronis2