The Apostle Andrew: The First-Called of the Twelve

At the very beginning of His ministry, Christ passed by two brother-fishermen casting their nets into the Sea of Galilee. He spoke very simple words to them: Follow Me, and I will make you fishers of men (Matthew 4:19). They did just this, straightaway casting aside their entire former lives. These were Simon-Peter and Andrew. Why, then, has the Apostle Andrew – whose memory we celebrate today – received the title of the “first-called”? 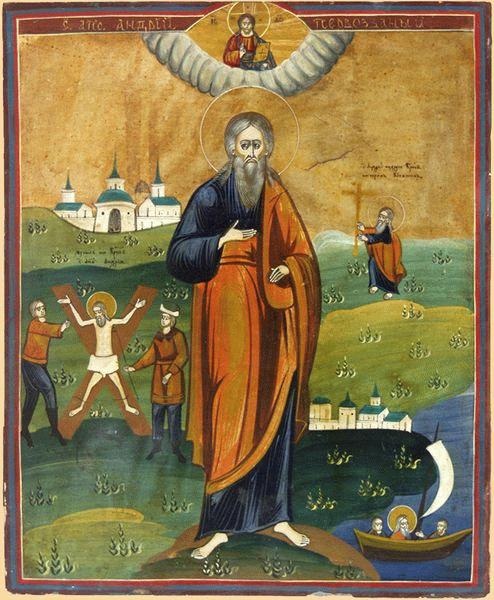 The brothers came from the village of Bethsaida. The Evangelist John tells us that Andrew had been a disciple of John the Baptist and had heard how the latter called Jesus “the Lamb of God” [cf. John 1:36]. This was in fact the most important thing in His earthly ministry: neither preaching, nor miracles, but the sacrifice that He was to offer on the Cross, becoming the Lamb for the salvation of all of humanity. Andrew believed in this at once, for which reason we today call him the “first-called” – he was the first of the Apostles to be called. It was he who pointed out to Christ the boy with the five loaves and two fishes, which were later miraculously multiplied to feed the multitude [cf. John 6:8-9]. He, along with Phillip, brought several Hellenes to Christ [cf. John 12:20-22] (we do not know of any other such cases), but Scripture tells little about Andrew. We know him primarily through his acts and life.

When the Apostles were sent forth to preach, they divided by lot the countries in which they would proclaim the Good News. Andrew received the coast of Pontus Euxine, that is, of the Black Sea. The southern coast (including the Crimean south coast) was part of the “civilized world” of the time, that is, of the Roman Empire, while barbarians called Scythians lived on the northern Black Sea coast. We do not know exactly how far north the Apostle Andrew went in his journeying, but a relatively late tradition has been passed down that he looked down upon the Dnieper River and blessed the place where Kiev was later to be founded; there is even a tradition that he reached the land of Novgorod and was astonished by the local inhabitants’ custom of taking steam baths! This is evidently an invention: the early sources say nothing about a northern voyage, no traces of this journey remain, and it is rather difficult to imagine such a voyage in the first century. Nonetheless, we can certainly say that the Apostle Andrew was the first to spread Christianity “in our direction.” It is quite likely that he did visit Chersonese, the future Sevastopol [in Ukraine].

There is another story that is also reliable: that the Apostle Andrew visited Byzantium, on which site the city of Constantinople was later built, founding a Christian community there and ordaining Stachys, an Apostle of the Seventy, to the episcopacy. St. Andrew’s life speaks of the many miraculous healings, and even of raising of the dead, that were accomplished in various cities through the prayers of the Apostle; it likewise speaks of the cruel persecutions he endured. 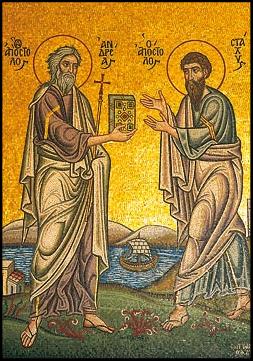 The Apostles Andrew and Stachys

After his voyage to the Black Sea, the Apostle traveled to Rome, the capital of the Empire, where his brother Peter was at the time. Emperor Nero was the ruler of Rome, and a time of persecution arose against the Christians, in which both brothers were later to perish.

Andrew decided to return from Rome to where he had been before. Along the way he stopped in the city of Patras on the Greek Peloponnese, where he witnessed the persecution of Christians and spoke out in their defense before a Roman governor named Aegeates.  The Roman replied: “Are you Andrew, who destroys the temples of the gods, and persuades men about the religion that, having lately made its appearance, the emperors of the Romans have given orders to suppress?” For him, the most unacceptable Christian teaching was that of the crucified Savior, since this torturous and shameful execution was reserved for the most hardened of criminals from the very lowest strata of society. How could one worship a crucified Man?

In reply, the Apostle set forth the story of the creation of the world and of the fall, of the Savior’s earthly life and of the meaning of His death on the Cross, calling upon him to join him in the Christian faith, that he might find his own soul. The Roman burst into laughter: “Do you mean that my soul has been lost?” From his perspective, only a fool could believe all this. In order to challenge the Apostle’s faith, he began to threaten him with death by crucifixion.

The price of his preaching was indeed high, but the Apostle was prepared to pay it. When Andrew was cast into prison to await his pending execution, a crowd of people gathered around, ready to revolt in order to free the innocent sufferer. He appealed to them, urging them not to hinder that which needed to be accomplished, since his temporal sufferings would lead him to eternal glory. After all, he himself had once agreed to follow the Lamb…

A diagonal cross in the shape of the letter X (which is now called St. Andrew’s Cross) was chosen as the Apostle Andrew’s means of execution. To prolong his suffering, Aegeates ordered that, rather than being nailed to the cross, he be tied to it hand and foot. “Rejoice, O cross, which has been sanctified by my Lord and Christ! You had been the image of fear but, after He died upon you, you have become the sign of joy and love!” With such words did the Apostle ascend upon the cross, on which he hung for two days before dying, two days during which he spoke with the people standing nearby… 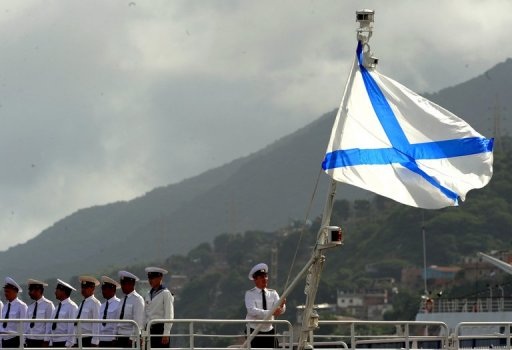 The Apostle Andrew’s memory is celebrated on November 30 according to the Old Calendar (December 13 according to the New). The longstanding tradition about the Apostle’s preaching on lands that were to become part of Rus’ caused the rulers of the Russian Empire to hold him in special regard: the Order of St. Andrew the First-Called became the state’s highest-ranking order, while a flag bearing St. Andrew’s Cross flies above the Russian navy to this day. 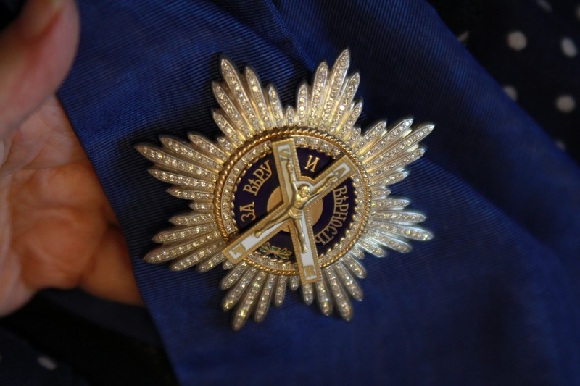 As thou art the first-called of the apostles and the brother of the pre-eminent one, entreat thou the Master of All, O Andrew, that He grant peace to the world and great mercy to our souls.

The divinely eloquent namesake of manliness, the eminent follower of the Church, the kinsman of Peter, let us praise, for as of old he was called, so now he calleth us: Come ye, we have found the Desired One! 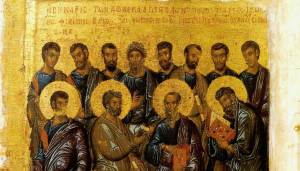 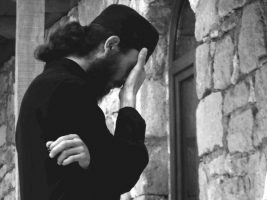 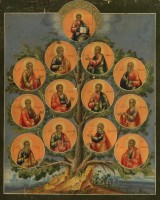