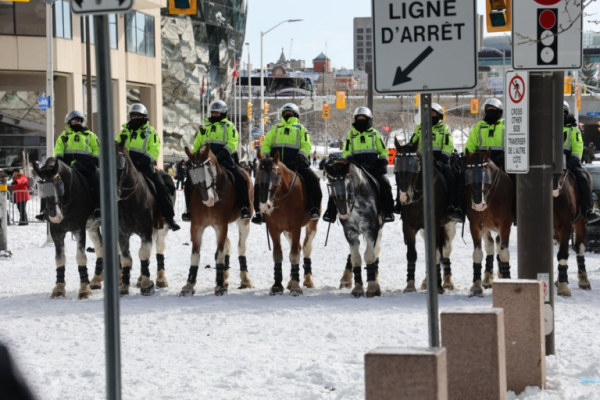 It is normal at this season in the Church year to speak about the spiritual preparation for the Lenten Fast. This is not a normal time, however.

This week, for this first time in history, Canada fell under the dark cloud of martial law.

Any Church leader would be remiss if he were to remain silent in the face of this evil.

You will recall in the Book of Exodus, we read that there arose in Egypt a king – a new pharaoh – and he said unto his people, Behold, the people of the children of Israel are more and mightier than we: Come on, let us deal wisely with them; lest they multiply, and it come to pass, that, when there falleth out any war, they join also unto our enemies, and fight against us, and so get them up out of the land.

Therefore they set over them taskmasters to afflict them with their burdens. (Exodus 1)

The Lord raised up spokesmen – Moses and Aaron – to speak to Pharaoh..

They had one message: Let my people go.

We read in the scriptures that the Lord hardened the heart of Pharaoh.

These spokesmen for God’s people went to Pharaoh with miracles (Exodus 7:13) – but Pharaoh’s heart was hardened.

These spokesmen for God’s people turned the River Nile into blood, by the power of God (Exodus 7:22) – never lifting a hand against the Egyptians! – but Pharaoh’s heart was hardened.

These spokesmen for God’s people even went to Pharaoh when there was a break – a pause in one of the plagues sent by God (Exodus 8:15) – but when Pharaoh saw God’s mercy toward him, Pharaoh’s heart was hardened toward the people of God.

We read in the book of Exodus, fifteen times – Fifteen! –  Pharaoh hardened his heart against the people of God, and he refused to listen to the spokesmen of the Lord – as the Lord had said Pharaoh would do!

Even when Pharaoh’s own magicians – his own cabinet members – warned him “This is the finger of God (against you)” (Exodus 8:19) – he would not listen.

Brothers and sisters: this has always been the experience of the people of God with demonic dictators. In a dictatorship, the only real crime is opposing the regime.

Our holy saints have faced such demonically-inspired attacks by dictators many times.

In 1925, Patriarch Saint Tikhon stood against the Bolsheviks when they took away land from the people of Russia. The Communists smothered him to death with a pillow.

In 2022, our dictatorship freezes bank accounts, and when people oppose this, they trample them with horses.

In 1943, Saint Alexander Schmorell was arrested for the crime of spreading leaflets denouncing the Nazi regime in Germany. His family appealed his death sentence to the authorities for two months until a letter came back to the prison. It read: “I reject all petitions for mercy.” It was signed “Adolf Hitler”.

In 2022, our dictator says of his enemies that they take up space. That they hold unacceptable views. That we have to make a choice: do we tolerate “these people”?

Why has such evil been visited upon us, dear brothers and sisters?

Why has such a demonic stench come to sit over a land we once thought of as safe, and strong, and free?

Aleksandr Solzhenitsyn, the Russian dissident who suffered terribly under the Soviet dictatorship of the last century, described what happened in his country – an Orthodox Christian country, full of well-educated people, who often spoke many languages, and who considered themselves worldly, modern, and cultured – until they turned to communist totalitarianism:

Orthodox churches were stripped of their valuables in 1922 at the instigation of Lenin and Trotsky. In subsequent years, including both the Stalin and the Khrushchev periods, tens of thousands of churches were torn down or desecrated, leaving behind a disfigured wasteland that bore no resemblance to Russia such as it had stood for centuries. Entire districts and cities of half a million inhabitants were left without a single church. Our people were condemned to live in this dark and mute wilderness for decades, groping their way to God and keeping to this course by trial and error.

What lesson can we take from Russia, from Nazi Germany, from the enslavement of the ancient Israelites – and from every society that has slipped into the darkness of dictatorship, and asks itself the question, why is this happening to us?

Solzhenitsyn – a devout Orthodox Christian – gives us the answer:

He said, If I were asked today to formulate as concisely as possible the main cause of the ruinous Revolution that swallowed up some 60 million of our people, I could not put it more accurately than to repeat: “Men have forgotten God; that’s why all this has happened.”

Nothing different has led to the darkness that has overtaken our country in this moment of crisis.

Men have forgotten God; that’s why all this has happened.

The solution to our crisis is found in those prophetic words, just as it is in the lives of our saints.

When the people of Israel repented and returned to God, the Lord led them out of Egypt – but only after decades and decades of great sorrows.

When the people of Europe repented and returned to God, the Lord delivered them from the yoke of Soviet Communism, and the wrath of Nazi Germany – but only after years of great sorrows.

Brothers and sisters, we are at the threshold of the season of repentance.

As our country languishes under this cloud of darkness, let us use this time of repentance to return to God, to begin to escape this great evil.

Firstly, within each of our homes, we must begin to drive away the influence of the evil one.

Starting today, each faithful person, before going to bed, should take holy water and bless their home, using the prayer of the Holy Cross, Let God arise, and let His enemies be scattered.

This is a faithful Orthodox Christian practice, on top of an annual house blessing by the priest.

Secondly, if you do not already pray each day, and confess your sins each month before a priest, make it your habit now to do so.

Nothing will be accomplished to free our country from evil without our repentance.

If we want to banish evil from our nation, the place we start is not under the Peace Tower of our national Parliament, and not the dictator’s residence at Sussex Drive – it must start in our hearts, through the Holy Mystery of Confession.

If you are not confessing your sins every couple weeks before God, and receiving Holy Communion properly prepared to do so, why on earth would you imagine you would be able to make a change in our country?

Dear brothers and sisters: we are indeed living under a dark and evil cloud in our country.

But the Lord has not allowed this cloud to come upon us by accident.

Many thousands of people have already stood righteously, peacefully, prayerfully, and with repentance against this dictatorship, and have felt its wrath. That is always the way in which the evil one responds to those who bring the peace of Christ.

If we ever hope to see this darkness be lifted from our land, however, we will only accomplish it by banishing the evil one from our own hearts, and our own homes.

When we do so, the grace and power of God will return to the Canadian House of Commons, and the Lord will again bless us with leaders who honour and worship Him.