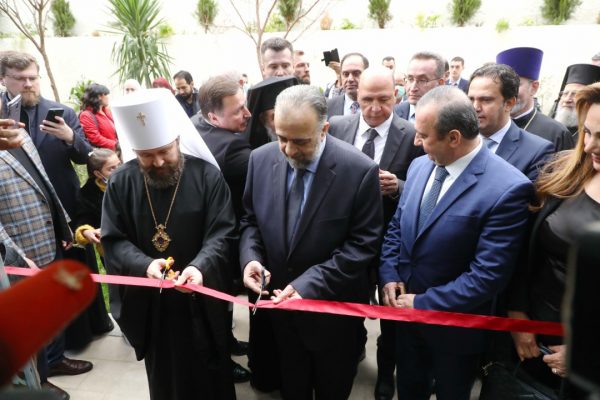 On March 6, 2022, Metropolitan Hilarion of Volokolamsk, chairman of the Moscow Patriarchate’s Department for External Church Relations (DECR), took part in the opening ceremony of the Center for Pediatric Prosthetics and Rehabilitation at the Representation of the Russian Orthodox Church in Damascus, Syria.

The Centre has been created with the blessing of His Holiness Patriarch Kirill of Moscow and All Russia and with the support of His Beatitude Patriarch John X of Antioch and All the East, the Council for Cooperation with Religious Associations under the President of the Russian Federation; the Foundation for the Support of Christian Culture and Heritage; and ‘Poznanie” and Kirche in Not Charity Foundations.

Attending the ceremony were Dr. Muhammad Abdul Sattar Assayed, Minister of Endowments of the Syrian Arab Republic; Mr. Hussein Makhlouf, Minister of the Local Administration and Environment; H.E. Alexander V. Yefimov, Ambassador Extraordinary and Plenipotentiary of the Russian Federation to the Syrian Arab Republic: Marie Al-Bitar, deputy of the People’s Council of the Syrian Arab Republic and head of the Parliamentary Committee for relations with the Orthodox Church; Colonel General Michel Farah, head of the medical services directorate of the Ministry of Inferior; Mr. Adel al-Olabi, Governor of Damascus; Bishop Moussa of Daraya, senior auxiliary bishop of the Patriarch of Antioch; Archpriest Nikolay Balashov, DECR vice-chairman; Hegumen Arseny (Sokolov), representative of the Patriarch of Moscow and All Russia to the Patriarch of Antioch; Rev. Alexander Karzan, secretary to the DECR chairman; Mr. Nikolay V. Sukhov, director of the Russian Centre for Science and Culture in Damascus; Mr. Rimal al-Saleh, head of Aluafa Charity Foundation; Dr. Jihad Muhammad Haddad, head physician of the Center for Pediatric Prosthetics and Rehabilitation at the Representation of the Russian Orthodox Church in Damascus; Mr. Hassan Raya, director of the Centre; Mr. Ivan A. Parfenov, deputy general director of “Poznanie” Charity Foundation; and Vycheslav Yu. Li, assistant to the DECR chairman.

Thirty children, who had had a prosthetic treatment earlier, and their parents were important guests at the event.

As part of the opening ceremony, a solemn cutting of a symbolic ribbon took place.

Greeting the top-level representatives of Syria’s state government, as well as those of the Orthodox Church of Antioch and of Damascus city authorities, Metropolitan Hilarion spoke about the history of the establishment of this rehabilitation center. This is what he said:

“A few years ago we began a rehabilitating program for Syrian children, who became victims of the military conflict: they were injured either by blown up mines or by shrapnel from exploding bombs. Some of them lost a leg or an arm, some – both legs; there were those who lost sight. When these children started to arrive in Russia, we realized that rehabilitation should be a comprehensive process. A child who has lost an arm or a leg needs not only to get prosthesis; he needs to be taught how to use it; and most importantly, it is to teach him to live again. This calls for a comprehensive approach and for the involvement of different specialists.

At first, upon their arrival, the children were not smiling and practically were not speaking. They were given colored pencils, but chose a black one and drew bombs or rockets. Then psychologists, prosthetic surgeons, primary care physicians, and ophthalmologists worked with the affected children, and gradually the will to live returned to them.

Soon we realized that if we want our reach-out to encompass a greater number of children, we should not bring them to Moscow, but instead, open a rehabilitation center here, in this country. So, we have opened such center on the premises of the Representation of the Russian Orthodox Church to the Patriarch of Antioch, so that the children could be brought here to have a prosthetic surgery, to take a psychological treatment and to undergo a comprehensive course of rehabilitation.

As you know, the child requires full-time attention; we cannot just perform a prosthetic operation on him and let him go wherever he chooses. Children grow, which means that every six months the prosthesis must be replaced by a new one. These children must be under constant medical supervision; they need to be worked with and talked to.

I told one boy, who came to our country together with other injured children, a story of a man, about whom we all read at school at the time of the Soviet Union. The story is about a pilot who lost both legs during the Great Patriotic War. But his will to live and striving for victory were so great that instead of leaving military service, he did everything to resume flying. Prostheses were made for him; he learnt to fly again, shot down many planes of the enemy and received the title of the Hero of the Soviet Union. Author Boris Polevoy wrote a book about this pilot entitled “The Story of a Real Man.”

Our task is to help all these children to become real people, so that despite all what happened to them in childhood, they may live a worthy and happy life. This is what we are here for.”

DECR chairman expressed special gratitude to the Foundation for the Support of Christian Culture and Heritage for its help with the repairs in the Centre and with purchasing modern medical equipment. “We made a request to the Foundation to continue financing the project. It is our hope that a favourable decision will be taken at the March session of the Foundation Board,” Metropolitan Hilarion said.

“I would like to assure our Syrian brothers and sisters that Russia and the Russian Orthodox Church will always be with you. We will do our best to ensure that your country rises from the ruins as early as possible and that all its residents, children and adults, are happy,” said Metropolitan Hilarion in conclusion.

In his speech, Dr. Muhammad Abdul Sattar Assayed, Minister of Endowments of the Syrian Arab Republic, expressed deep gratitude “for very important humanitarian work” to those who have made every effort to create this Centre, but, first of all, to His Holiness Patriarch Kirill of Moscow and All Russia, to His Beatitude Patriarch John X, Primate of the Orthodox Church of Antioch, to the regional and local authorities, and to the Embassy of the Russian Federation to Syria.

“We would also like to thank Metropolitan Hilarion, whom we know very well through his many visits to our country, for the attention he has rendered to the implementation of this project,” said the minister.

He expressed gratitude to the head of the Russian diplomatic mission to the Syrian Arab Republic and added: “The relations between our countries grow stronger with every passing day.”

The minister pointed out that the implementation of so important a project of the aid to the victims was being done “in pursuance of the teaching of Jesus Christ who spoke of peace and love. There can be no doubt that bringing peace to the earth is what the Russian Orthodox Church is doing now in Syria in cooperation with Patriarch John X of Antioch.

“We would like to express our sincere and profound gratitude to the Russian Federation and its President Vladimir Putin, and to Patriarch Kirill,” said Dr. Muhammad Abdul Sattar Assayed.

Russian Ambassador to Syria Alexander V. Yefimov addressed the participants in the ceremony, saying: “Today we are one family here, Christians and Muslims, and we have common celebration as we are opening this excellent centre for medical treatment of children. I believe that children are the most important thing in our life, and we should take special care for those of them who have become victims of this horrific war.”

The Russian diplomat cordially thanked all those who have contributed to the implementation of this important humanitarian project and added: “The opening of the centre is another testimony of fraternal, strategic and friendly relations between our two countries; these relations have historical roots at all kinds of levels, such as the level of presidents, governments, parliaments and peoples.”

Bishop Moussa of Daraya, senior auxiliary bishop of His Beatitude Patriarch John X of Antioch, delivered a welcoming speech to the participants in the ceremony.

They were given a tour around the centre and talked with children undergoing rehabilitation there. Children received presents from Metropolitan Hilarion.

The Centre will work on everyday basis. Little patients will be treated by pediatricians, traumatologists, neurologists, psychologists, rehabilitation physicians, and medical gymnastic instructors.

The Syrian physicians will work under patronage of the Research and Practice Centre of Children Psychoneurology of the Moscow Department of Public Health.