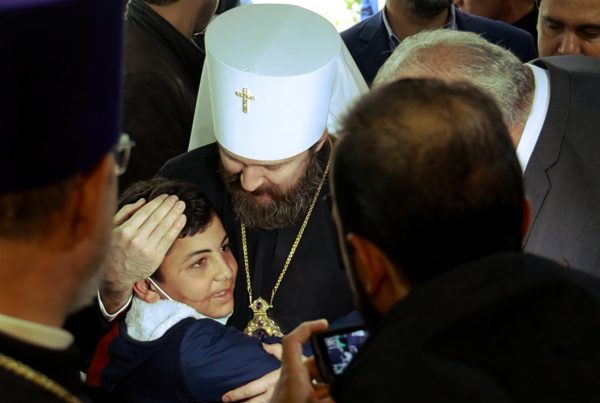 At the initiative of the Russian Orthodox Church, a unique Center for Pediatric Prosthetics and Rehabilitation was opened in Damascus, where leading Russian implantologists, as well as other specialists, began to provide assistance to Syrian children who lost limbs during the military conflict: the specialists help the children recover and learn to lead a normal life.

During the Church and the World program, Metropolitan Hilarion, Chairman of the Department for External Church Relations of the Moscow Patriarchate, spoke about the project to help the children of Syria and about the Center itself, in the opening of which he took part on March 6.

“Several years ago, we launched a program to rehabilitate those Syrian children who were affected by the armed conflict,” the hierarch said. “The cases there are very different: for example, one boy, who later came to us for treatment in Moscow, had been approached by a man at a break time near the school, who gave him a toy. When the man walked away, the toy exploded in the child’s hands. As the result, the boy lost both of his arms.”

Many of the victims have several injuries at once: they have lost their sight and a limb, and some of them do not have several limbs.

“We began to bring these children to Russia [for treatment],” the metropolitan noted, pointing out that working with such patients involves the participation of many specialists, because if a child has lost his limbs, it is not enough to simply replace the missing limbs with a prosthesis: you need to teach him how to use this prosthesis and the victim must undergo a comprehensive psychological rehabilitation.

“When these children arrived, they could not smile, they hardly spoke. They were given paper and colored pencils – they chose black and drew rockets and bombs. That’s all they had in mind. Psychologists, rehabilitologists, those doctors who deal with the correction of the spine worked with them (as a rule, if a child loses limbs, this begins to affect the spine, the body configuration changes). In general, a lot of complex work was required,” the hierarch stated.

He also recalled that, unlike an adult, a child grows, and about once every six months, children who have lost limbs need new prostheses, which means they must be constantly monitored by doctors. “We very quickly realized that we would not be able to bring children to Russia in this mode and give them adequate assistance, therefore, on the basis of the Compound of the Russian Orthodox Church in Damascus (and this is a four-story mansion that has a basement with a separate entrance), we created a Rehabilitation Center where children who have lost limbs and vision will be observed on a permanent basis; specialists will work with them,” Metropolitan Hilarion said.

As the archpastor noted, great attention of the Syrian public was attracted to the opening of the unique rehabilitation center: ministers of the Government of Syria, the mayor of Damascus, other government officials, religious and public figures attended the opening ceremony.

Touching upon the topic of financial support for the project, Metropolitan Hilarion said: “Yes, it is very difficult to find funds for this now. But we turned to the Foundation for the Support of Christian Heritage and Culture, with the help of which we were able, in fact, to create this center and adapt the premises of the Metochion for it. We hope that in the next few days the Foundation will consider our request to allocate funds so that we can continue this noble and very important activity, begun with the blessing of His Holiness Patriarch Kirill with the participation of His Beatitude Patriarch John X of Antioch.”