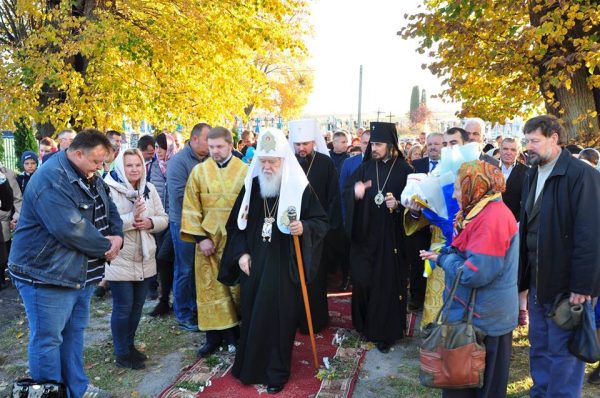 Supporters of the non-canonical Kiev Patriarchate seized a 100-year-old chapel of the canonical Ukrainian Church in the Ternopil Province village of Kulikov a few years ago, then completely tore it down to build their own church. The new “church” was consecrated by the schismatic “Patriarch” Philaret Denisenko on Saturday, reports Teren.

As Teren argues, the residents of the village did not want to pray in a canonical church so they destroyed it and built a new church in a few years. However, as the Union of Orthodox Journalistslearned from locals, the old chapel of the Holy Protection was actually seized by Philaret supporters in 2015 and destroyed against the locals’ wishes.

The canonical chapel was unique in that services in the Ukrainian language began there in 1937.

While registering the new schismatic community, local authorities realized that the same people had already registered a tiny community in the same village 15 years prior, which had gone nowhere. In order not to lose the opportunity to seize the canonical chapel, they had to give up their “paper” community and rewrite the statutes of the canonical parish.

There remain many canonical parishioners in the village who now attend services in a nearby village, where the Church recently opened a new parish.