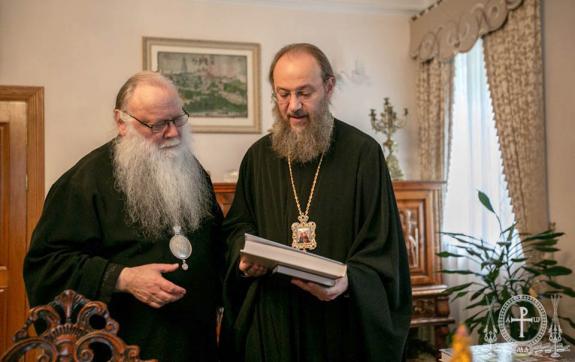 On June 3, 2019, His Eminence Metropolitan Antony of Borispol and Brovarsk, Chancellor of the Ukrainian Orthodox Church, met with His Eminence Archbishop Peter of Chicago and Mid-America, Rector of the Chicago Pastoral School of the Russian Orthodox Church Outside of Russia, who is on a pilgrimage to the holy sites of Ukraine, as reported by the official website of the Kievan Metropoliate.

The meeting of the hierarchs took place at the Kievan Lavra of the Caves. They discussed cooperating in the area of theological education. Present at the meeting was His Grace Vicar Bishop Silvester of Belogorodsk, Rector of the Kiev Theological Schools, Protopriest Rostislav Snegirev, Assistant Rector of the Kiev Theological Academy and Seminary’s Department of Foreign Exchange Students, as well as Archbishop Peter’s delegates.

On May 31, Archbishop Peter visited Kiev Theological Academy and Seminary, where he met with Vladyka Silvester, at which they initiated discussions on joint work between the Chicago Pastoral School and the KTAS.