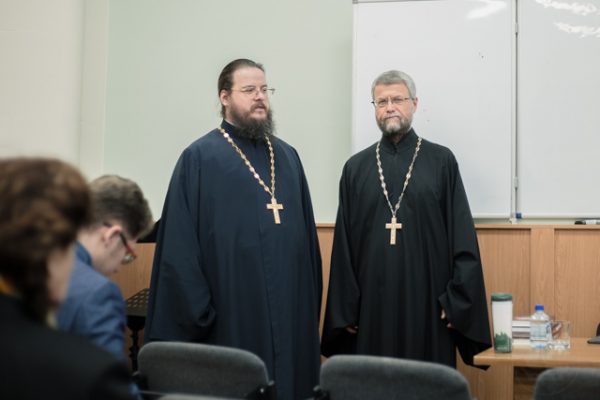 On January 30, the Academy on the Neva hosted a lecture by Archpriest Georgy Zavershinsky, a dean of the parishes of Scotland and Northern Ireland, on the topic “Relationship category: Orthodox and Western opinion”. The meeting was attended by students and teachers of the St. Petersburg Theological Academy.

At the beginning of his speech, Father Georgy spoke about a model for building religious knowledge. In his opinion, the basis of each religion lies in the knowledge of God and the basic tenets of dogma, which a person receives through divine revelation. From the point of view of theology, the knowledge of God also consists in building a personal relationship with the Creator.

Further, Archpriest Georgy analyzed how the character of intra-trinity relations in God in the Catholic and Orthodox traditions is understood, and also noted that dogmatic differences are not always an insurmountable obstacle in the dialogue between people of different Christian denominations:

“When I defended my doctoral work, my opponent was a Catholic dogma professor – a very responsible and strict representative of the Roman Catholic Church. He was very skeptical of my work. And I noticed that he does not understand my reasoning. In the last question, the teacher asked for an example of a genuine dialogue, where there is a commonality between people regarding God. To which I immediately replied: “Liturgy, the Sacrament of the Holy Eucharist.” He did not ask any more questions. Then I felt that mutual understanding had arisen between us, despite the fact that he is Catholic and there are differences between us in understanding the fundamentals of Christian teaching. ”

After that, Archpriest Georgy talked about the theories of dialogue in the presentation of philosophers of the 20th century, such as Martin Buber, Franz Rosenzweig and Ferdinand Ebner.

At the end of the lecture, Father Georgy answered the students’ questions and recommended to tead his book “The Theology of Dialogue: the Trinitarian View”.