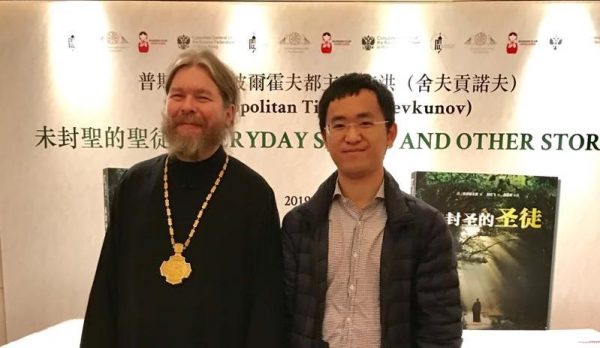 His Eminence Metropolitan Tikhon (Shevkunov) of Pskov and Porkhov, the author of the best-seller Everyday Saints, presented the Chinese translation of his work in Hong Kong on Monday, reports TASS.

“Although it’s just a crumb, it’s still our humble contribution to the strengthening of the mutual understanding of the peoples of Russia and China. If it somewhat opens to Chinese readers the most important thing, what we have in the spiritual life in Russia, I’ll consider my mission accomplished,” His Eminence said at the event at the Grand Hyatt in Hong Kong.

The initiative to translate the book into Chinese was launched in 2014.

The book release drew diplomats, journalists, public figures, and representatives of the Russian club in Hong Kong and the local Orthodox parish.

Professor of Russian philology Liu Wenhai, President of the Chinese Association for the Study of Russian Literature, says he spent nearly a year translating the nearly 400 pages and 200,000 characters.

“It is distinguished from many other religious books by the fascinating narrative, the sincere tone, and the absence of strict moral teachings and theological sermons,” Wenhai said.

Illustrations for the Chinese translation were handled by Zhou Changsin, who visited Russia and prepared 25 thematic paintings. He is considered the founder of the style of Chinese oil painting characterized by its fine details and expressive tones.

Everyday Saints has already been published in 18 different languages and sold 3 million copies, Met. Tikhon noted. The Swedish translation was published just a few days ago as well.

Met. Tikhon was also in China in July to present the Chinese translation of the book Word of a Pastorby His Holiness Patriarch Kirill. “In China, unfortunately, little is known about Orthodoxy, which is the foundation and core of the spiritual life in Russia. At the same time, we find considerable interest, firstly from educated people, academic circles in China, about what Orthodoxy is,” he said.