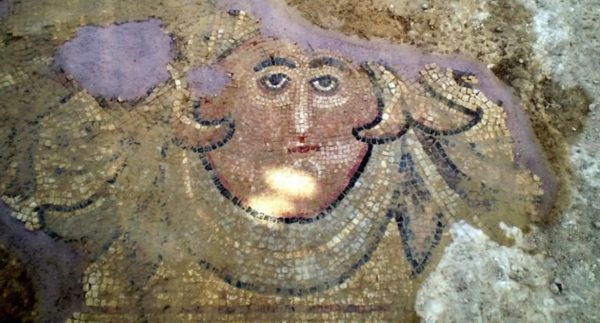 The remains of what was once a prosperous Christian town that was destroyed by Persian forces about 1,400 years ago have been uncovered in northern Israel, archaeologists say, reports Haaretz.

The highlight of the excavation was the discovery of a building marked with Christian symbols. This and other treasures were unearthed in a salvage dig after the ruins of the Byzantine town were discovered during works to widen the road connecting the town of Shlomi and Kibbutz Hanita, just south of Israel’s border with Lebanon, researchers reported last week in Atiqot, a journal published by the Israel Antiquities Authority.

The site does appear in past archaeological surveys but hadn’t been thoroughly excavated before. It is not known from Byzantine sources but researchers believe it is the town of Pi Metzuba, which is mentioned in the Jerusalem Talmud, the compendium of Jewish religious law compiled in the fourth-fifth century in the Galilee.

“While for now we have no documents from Christian sources about this settlement, all the evidence points to an almost entirely Christian population,” said Gilad Cinamon, the IAA archaeologist who headed the dig.

Only a small part of the site has been excavated so far. Most of the buildings uncovered were small, modest houses connected by tight alleys, with the exception of one large, well-built structure in the middle of the town. It was within that building that the archaeologists recovered the large mosaic, as well as a bronze cross, which may have been part of a chandelier, and a door lintel decorated with a cross.

These finds, along with the scale of the building, initially led the archaeologists to think they were excavating part of a monastery or a church, Cinamon says. Apparently not, though.

“It is now well understood that the mosaic decorated the living room of a self-sustained urban villa owned by a very wealthy family,” he concludes. “And this is quite a rare find for this area in the Byzantine period.” The mosaic, measuring around five by five meters (16 by 16 feet), is only partially preserved and was studied by Rina Talgam, an art history professor at the Hebrew University in Jerusalem.