Source: Basilica.ro
An important archaeological discovery was made public on Wednesday by members of the Israel Antiquities Authority.
Mihail Mere-Albe | 25 October 2019 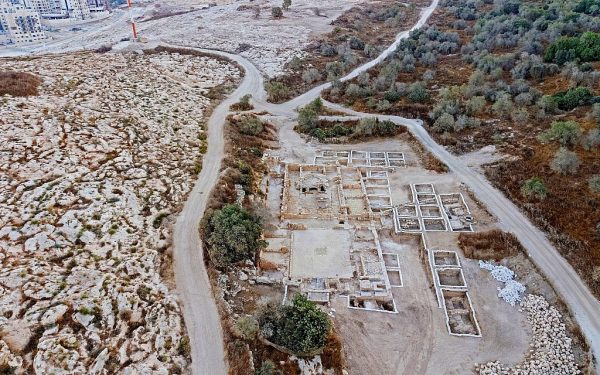 After three years of painstaking excavations, a Byzantine-era Christian church with spectacular, well-preserved mosaics and frescoes has finally been completely unearthed. The structure is located approximately ten miles west of the city of Jerusalem, World.greekreporter reports.

The fascinating, yet mysterious, findings include some Greek inscriptions as well.

One of these says that the church was dedicated to a ”Glorious Martyr,” yet no inscription specifies exactly which martyr the inscription refers to.

No other evidence has so far been found anywhere on the site to suggest who this martyr may have been.

The church compound, 1.5 dunam or just over a third of an acre in size, has a rare intact underground crypt that once presumably contained the relics of the anonymous martyr immortalized in a Greek inscription at the site.

Archaeologists estimate that the church was actively used by pilgrims in approximately the year 600 AD. They also found an amazingly detailed inscription stating that the Byzantine Emperor Tiberius II Constantine had funded an expansion of the church.

Although it is still unknown to whom the church was dedicated, archaeologists believe that it must have been an important ecclesiastical figure, since this is the first time such a well-preserved monument from that period has ever been discovered in the area.

This is also the only Byzantine church in the region to be proven to have been funded by the Byzantine Emperor, which could mean the church had an extremely important role in Christianity at that time.