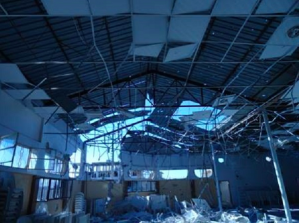 Photo of destruction in Syrian city of Sadad after an Islamist attack in October, 2013.

More than 30 bodies of Christian civilians have been uncovered in mass graves in the Syrian city of Sadad, which was destroyed in an attack by Islamic militants, with the Syrian Orthodox Archbishop describing the incident as “the most serious and biggest massacre” of Christians in the past two years and a half.

A total of 45 Christians were reported to have been killed in the small town halfway between Homs and Damascus, after Islamist militants apparently invaded on Oct. 21. Fides News Agency reported that representatives of the Syrian Orthodox Patriarchate and relatives of the victims found the mass graves when they returned home, and later provided a proper burial for their dead relatives and friends.

“45 innocent civilians were martyred for no reason, and among them several women and children, many thrown into mass graves. Other civilians were threatened and terrorized. 30 were wounded and 10 are still missing,” explained Archbishop Selwanos Boutros Alnemeh, Syriac Orthodox Metropolitan of Homs and Hama.

“For one week, 1,500 families were held as hostages and human shields. Among them children, the elderly, the young, men and women. Some of them fled on foot travelling 8 km (5 miles) from Sadad to Al-Hafer to find refuge. About 2,500 families fled from Sadad, taking only their clothes, due to the irruption of armed groups and today they are refugees scattered between Damascus, Homs, Fayrouza, Zaydal, Maskane, and Al-Fhayle.”

Eyewitnesses said the 15,000 population city has been entirely destroyed and looted. Sadad was described as an ancient village dating back to 2,000 B.C. with a number of churches, temples, historic landmarks and archaeological sites.

Syria has been locked in a civil war for over two years and a half now, with various rebel factions trying to take down the government of President Bashar al-Assad. Christians, who make up 10 percent of the population, have been caught in the crossfire, and worries are that a victory for radical Islamist groups will put them in even greater danger.

“I think the Islamic rebels winning is a bad idea for the Christians. All of a sudden we’ll have another Islamic state where Christians are persecuted,” Senator Rand Paul (R-Ky.) asserted in September.

Archbishop Alnemeh said in his account of the mass attack in Sadad that people now have no electricity, water or telephone, and that all the houses have been robbed.

“The churches are damaged and desecrated, deprived of old books and precious furniture. Schools, government buildings, municipal buildings have been destroyed, along with the post office, the hospital and the clinic,” he added.

“We have shouted aid to the world but no one has listened to us. Where is the Christian conscience? Where is human consciousness? Where are my brothers? I think of all those who are suffering today in mourning and discomfort: We ask everyone to pray for us.”

Most viewed articles
Metropolitan Hilarion Speaks on Whether It Is Possible for ROC to Reunite with Old-Believers239
Last Man Standing203
The Temple of Woke: Are Universities Basically New ‘Religious’ Training Centers?126
Businessman Buys a 19th Century Church and Returns It to the Faithful87
Turning Trials Into Hope70
Metropolitan Onuphry: People Get Strength for Life and Salvation in the Church62
Russian and Arabian Clergymen Celebrate the Memory of Prophet Elijah in Israel52
Did God Really Order a Genocide?1
Most popular authors
Pravmir.com team440
Archpriest Geoffrey Korz203
Eric Hyde126
Fr. James Guirguis70
Archpriest Lawrence Farley1