Source: The Catholic Register
Natalya Mihailova | 02 July 2017
ALEPPO, Syria – Christians who fled Aleppo because of the four year battle for the city are now returning, and in the face of such challenges as poverty, destruction, and a shortages of basic goods, they persevere with the help of the local Church. 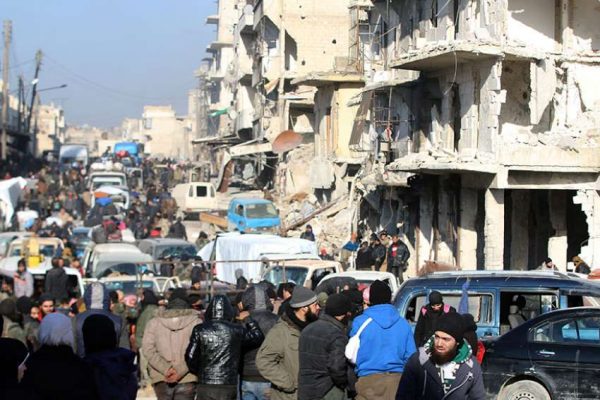 Fr. Ibrahim Alsabagh, a Franciscan priest in the city, told CNA that between January and June, 18 Catholic families have returned to Aleppo from places like Armenia, France, Germany, and Venezuela. In addition, 400 Christian families of the Armenian community returned to the area.

He said these families have decided to return because in their host countries “they live in poverty and feel like foreigners. Also because they miss the warmth of the Christian community that welcomes, heals, and accompanies each family with all its needs.”

“When they see the aid that we give to the Christians in Aleppo, they say, ‘Why don’t we return home, to our culture, to our society when the bombings have ceased?’” he said.

Syria’s largest city before the country’s civil war began in 2011, control of Aleppo was divided among government and several rebel groups from July 2012 until the Syrian government recaptured the metropolis in December 2016.

The Franciscan said that while rebels have been expelled from the city, unfortunately “living conditions have not improved in Aleppo. The only thing that has improved is that there are no more bombings, thank God, but there is still insecurity.”

In addition, “it is difficult to work because there are few hours in which there is electricity. There is also a small labor force because many young people are gone.There is food, but high prices,” he added.

He explained that the economic situation in Aleppo is so difficult that “even if the both parents work, it is impossible to get ahead without the help of the Church. There are many needy people and we trust in divine providence.”

On the other hand, he indicated that only a third of the Christians have stayed in the city. He stated that the Christians who remained were the poorest. There are also some families who had the firm conviction that “what the Lord wants them there because they must fulfill the mission of being a bridge of reconciliation and of bearing witness to Jesus Christ in this land.”

Fr. Ibrahim stressed that in the midst of this difficult situation “the key is the community that comes out to give people a sign of hope and remains a beacon. They are a very strong support to the family, especially when people feel alone and have left everything to return to their country. ”

He commented that the Franciscans have developed a project to help Christians rebuild their homes. Since 2016 the order has rebuilt some 470 homes, and this year they have created an office where nine engineers evaluate the cases of families whose houses were damaged in the war.

Fr. Ibrahim added that there are several families who, despite having their homes destroyed, are still required to pay the mortgage on their home to the bank. The church also helps them.

The priest said that the money with which he supports the families comes from “many of the people and the families around the world who pray for us and send donations. Even if they are modest, it shows how the Lord works miracles with them.”

“As St. Francis of Assisi said, we depend on the generosity, the divine providence from which our aid comes. Every day we see this miracle and we thank those who help us with our whole heart.”

In addition, the priest said that there are 30 couples who will get married soon, and said that this aid is also for them.

“This is a great joy for us, to see that young people get married and say yes to the gift of life. This gives us great consolation,” he said. “It means that there is a future in Aleppo and a desire for life to conquer death.”