Christians on ‘Heinous’ Syria Chemical Attack: ‘Christ Means Even If I Die, I Have Hope of Eternity’ 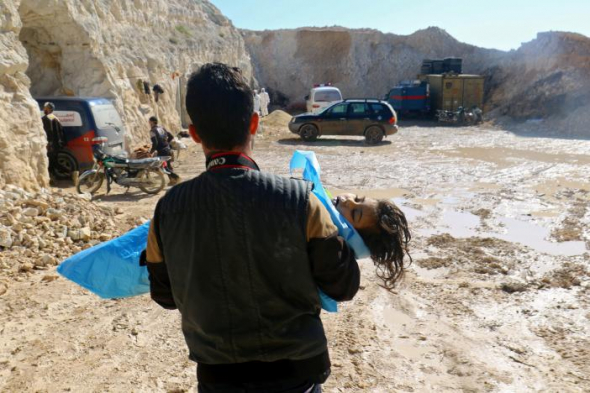 A man carries the body of a dead child, after what rescue workers described as a suspected gas attack in the town of Khan Sheikhoun in rebel-held Idlib, Syria April 4, 2017. Photo: Reuters/Ammar Abdullah

Christians have been reacting to the horrific chemical attack in Syria that killed 70 people, including children, by declaring that Jesus Christ triumphs over death.

“It is a hard question to answer in some senses because the first need is for peace. There is a need for treating the wounded and bringing comfort to those who have lost loved ones,” Todd Nettleton with The Voice of the Martyrs USA told Mission Network News on Thursday about what the Gospel might say about such a devastating attack on civilians.

“But I think, at the bottom line, the Gospel brings hope. The thought of eternity with Christ means even if I am killed on this earth, I have the hope of eternity. I have hope for a future with Jesus. And, sometimes in desperate situations, that really is all you have is the hope that there can be eternity in heaven.”

The chemical attack hit the rebel-held town of Khan Sheikhoun, choking dozens of people to death, with accounts describing how the chemicals caused the 70 victims to experience “vomiting, foaming at the mouth, writhing.”

Nettleton said, “In this case, many of the victims were children. There were attacks on the clinics where the wounded were being treated — missile attacks. So it was really a heinous attack. And hopefully the world will pay attention, and the world will try to step in and do something to help the Syrian people.”

Russia condemned the U.S. over the air strikes, with Dmitry Peskov, spokesman for Putin, calling it “an act of aggression against a sovereign nation.”

Trump explained in a speech Thursday that the world needs to stand up to a “dictator” like Assad, whom he accused of using the chemical weapons to take “innocent lives.”

“Tonight I call on all civilized nations to join us in seeking to end this slaughter and bloodshed in Syria and also to end terrorism of all kinds and all types,” Trump said.

Assad has been fighting to maintain control over Syria since the civil war began in 2011, but both he and the rebel groups he is battling have been accused by the international community of serious human rights abuses.

Former U.S. President Barack Obama had threatened Assad against crossing the so-called “red line” in the civil war, but in 2013 the U.S. decided against taking military action even after Assad was accused by world leaders of killing hundreds in a Damascus suburb in a sarin attack.