Christians Killed in Sri Lanka. We are in the Same Foxhole with Them

Source: Pravmir (Russian)
Sergey Khudiev | 24 April 2019
A series of terrorist attacks against a number of churches and hotels in Sri Lanka turned out to be one of the bloodiest terrorist attacks in history: at least 207 people were killed and at least 450 people were wounded. Obviously, suicide bombers quite deliberately carried out explosions exactly on Catholic Easter: when churches were crowded with praying people. 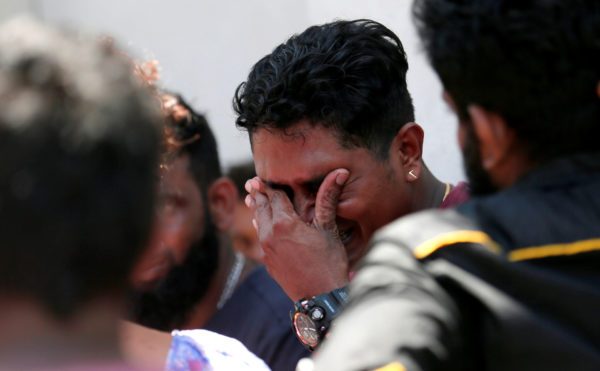 It is not yet clear who committed this atrocity: the suicide bombers’ tactic itself was actively practiced by “The Liberation Tigers of Tamil Eelam” during the protracted civil war in Sri Lanka which ended (in defeat of the “Tigers”) about ten years ago [the article was written on April 22, when some of the details were still unknown – Pravmir]. Most Tamils traditionally profess Hinduism, although the “Tiger” ideology was purely secular. The majority of the country’s population are Sinhalese, who practice Buddhism. There are also extremists among them. About one tenth of the population is Muslim.

In this regard, nothing remains, but to wait for additional information.

Yet there are important things that can already be said now.

When we speak about “spiritual warfare”, we are not allegorical. We say that there are very real spiritual hosts of wickedness in the heavenly places that cannot bear the Church: where people hear the word of God, reconcile with God through repentance, and partake of the Eucharist.

The hatred of the Church, which we have witnessed in the recent history of our country and which we are observing in other countries now, is more than just wickedness or stupidity of individual people. It is a manifestation of a certain spiritual reality. When we speak of “inhuman wickedness”, this is not an allegory either. It is literally like that: the source of this wickedness is not in the human realm.

The Pascha celebration, the proclamation of the Resurrection of Christ from the dead causes this force to feel a particularly painful rage. It is very important for the enemy to somehow silence this message, to kill this joy.

The word of God says that all of us, who profess the name of Christ, are involved in war, “Put on the whole armor of God, that you may be able to stand against the wiles of the devil. For we do not wrestle against flesh and blood, but against principalities, against powers, against the rulers of the darkness of this age, against spiritual hosts of wickedness in the heavenly places. Therefore take up the whole armor of God, that you may be able to withstand in the evil day, and having done all, to stand. Stand therefore, having girded your waist with truth, having put on the breastplate of righteousness, and having shod our feet with the preparation of the gospel of peace; above all, taking the shield of faith with which you will be able to quench all the fiery darts of the wicked one. And take the helmet of salvation, and the sword of the Spirit, which is the word of God; praying always with all prayer and supplication in the Spirit, being watchful to this end with all perseverance and supplication for all the saints” (Ephesians 6:11-18)

It is not a poetic way of telling us to fight our own passions and vices: it is a reference to spiritual reality. The spiritual hosts of wickedness are real, and we must defeat them through faith, righteousness, evangelism, and prayer.

This means that in the world full of hatred we must proclaim God’s forgiveness and love, in the world of desperate sorrow – the Holy Resurrection of Christ, in the world gripped by fear – confidence in God’s victory over the forces of evil, which have already been crushed at Calvary and will be finally banished from the world on the day of His second and glorious Coming.

It requires disciplined effort and the Apostle resorts to this military analogy for good reason. The devil has once again unmasked himself and we must take the fight we are involved in very seriously.

People killed in Sri Lanka (as in other places) for the name of Christ encourage us to think about one more thing: out attitude towards other Christians.

The killed and crippled are Catholics. We do not belong to the Roman Catholic Church, we do not share a number of doctrines of the Catholic Magisterium. That is not to say that it does not matter. The questions of the religious doctrine are important, the lukewarm attitude to them is unacceptable.

Yet they died for our Lord Jesus Christ at the hands of villains provoked by the enemy of our salvation. In the warfare, which the Apostle speaks of, we are in the same foxhole with them, confess the same God, celebrate the same Resurrection, and wait for the same Coming.

Administratively, we are unlikely to be reunited before the end of this world, and perhaps it makes sense. However, we should recognize each other as kin, associates, and brethren.

And pray for the repose of the dead, the healing of the wounded, and the consolation of the mourning.