Sri Lanka: The Worshipper Who Blocked a Bomber

Source: BBC
The family of one victim who died in Sunday's bomb blasts in Sri Lanka say his actions helped save lives. Ramesh Raju stopped a man with a backpack from entering the Zion church full of worshippers. If the attacker had entered there would have been many more casualties.
Pravmir.com team | 25 April 2019 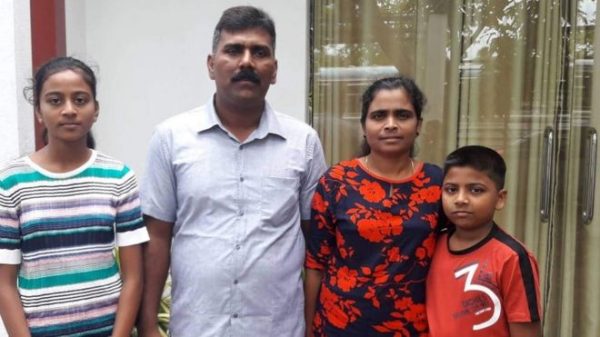 A large white poster hangs outside Chrishanthini Ramesh’s house in the town of Batticaloa on Sri Lanka’s east coast.

On the left is a photo of a man smiling into the camera. He’s wearing a grey shirt and has a moustache.

His name is Ramesh Raju. He was a father, a husband, a building contractor, and he was just 40 years old.

As we approach the sandy driveway to his home, groups of people are seated on plastic chairs.

Just as life is a shared experience among family and friends in these communities, so is death.

Relatives from far and wide have gathered here to pay their respects – some play nervously with their phones, others are crying.

One woman in a green sari is wailing uncontrollably.

As we make our way through the gathered throng, we are introduced to Chrishanthini and her two children Rukshika and Niruban, who are 14 and 12 respectively.

Chrishanthini is a Sunday school teacher at the Zion church, and last Sunday – like any other – she went to teach her class.

She and Ramesh took their children to worship every week, and he came to join them for prayers.

After classes finished, Chrishantini and some of the children went outside to have snacks before the Easter service was to begin.

Ramesh was also in the courtyard when he spotted a man he didn’t recognise carrying a large backpack.

The man told him it contained a video camera as he had come to film worshippers inside.

“My husband sensed something was wrong, and informed him he’d need to get permission first.

“He then forced him to leave,” Chrishanthini told me.

As she headed into the church, which was packed with as many as 450 people on one of the most sacred days of the year, she heard a loud bang.

As panic ensued, some of the congregation scaled the walls by the church to survey the ground below for their loved ones.

Crowds ran in any direction they could, as some of the buildings caught fire.

Chrishanthini and her family escaped and rushed to the nearby hospitals to find Ramesh.

Hours later, they found his body.

He had died instantly, at the spot she’d last seen him.

The family were reunited once again, but for the very last time.

Ramesh was buried on Monday. Members of the local police were among those who turned out to pay their respects.

While his actions didn’t save him, they did save the lives of many others.

As I chatted to Chrishanthini she barely shed a tear, but then as she shared fond memories of her life partner whose life had been taken away, she broke down.

For Chrishantini the pain of loss is all too familiar.

At 40, she has lived most of her live as an orphan, after both her parents were murdered in Sri Lanka’s bloody civil war.

“My mother was killed when I was very young, she had her throat cut,” she told me. “A few years later my father was also killed in suspicious circumstances,” she adds.

If that wasn’t enough pain, Chrishantini also tells me her aunt died in the boxing day Tsunami in 2004, which claimed more than 2,000 lives in Batticaloa.

This scenic stretch of the country’s east coast has witnessed large-scale tragedy on so many occasions, and it’s people like Chrishantini who live through the daily anguish.

Nothing can bring back her dear Ramesh, but his heroic actions – which spared other families pain – at least help comfort her own.