“Christians Are Subjected to the Systematic and Constant Genocide” 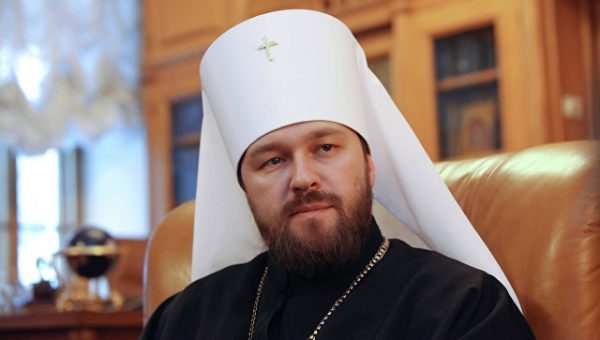 On 10-14 May 2017, Metropolitan Hilarion of Volokolamsk, chairman of the Moscow Patriarchate’s Department for External Church Relations (DECR), visited Washington, D.C., to take part in the World Summit in Defense of Persecuted Christians. Metropolitan Hilarion also met with the U.S. Vice-President Michael Pence and various religious leaders of the country. In his interview to the Interfax-Religion, the DECR chairman shared his impressions of the visit.

– Your Eminence, you happened to visit the USA at a period of aggravation of contradictions between our countries. Did it affect the agenda and atmosphere of your meetings with representatives of the American leadership?

– No, it did not. On the contrary, I saw that representatives of the American leadership wanted to cooperate with Russia, to solve the accumulated problems. Of course, my responsibilities as chairman of the Moscow Patriarchate’s DECR do not imply conducting negotiations on behalf of the Russian government. I only spoke of what worries the Church – first and foremost, of the persecution of Christians and the threat of international terrorism.

There is only one way to put an end to terrorism, as His Holiness Patriarch Kirill tirelessly repeats – the way of concerted actions of all the states that are ready to oppose terrorists not in word only, but also in deed. Instead of several anti-terror coalitions clashing with each other, only one coalition is needed – united and consolidated. I hope that the USA and Russia will find an opportunity to set aside their political differences and rally round to defeat the international terrorism, as they had once rallied round to defeat the German fascism.

– Is there a common denominator, in your opinion as pastor, that could help our countries to come to an agreement in the rather arduous discussion on the most pressing items on the international agenda?

– All countries are now facing one common challenge – international terrorism. No country is protected from this plague of the 21st century. Terrorists act basely and cynically, disguising their crimes under Islamic slogans and shouting “Allahu Akbar” while killing people. They choose as their targets innocent people who did them nothing wrong, whose only fault is that they do not share their satanic ideology.

In the Middle East, in a number of African countries and in other regions, terrorists subject Christians to genocide. Until recently, there was a “conspiracy of silence” in the West with regard to this situation. Neither politicians nor the mass media would speak of it. Today this information blockade has been broken – not least because of the terrorists themselves who post on the Internet videos showing how they carry out gruesome executions of Christians, behead them, shoot them down, crucify them, and kill the whole families and villages.

Today both the politicians and journalists have started speaking of the persecution of Christians. The speeches of the U.S. Vice-President Pence and several American congressmen at the World Summit in Defense of Persecuted Christians are a vivid evidence of the fact.

However, the attention paid to the problem of persecution of Christians is incommensurable with the scale of these persecutions. In full view of the whole civilized world, the humanitarian catastrophe of unprecedented scale is unfolding, with Christians being subjected to the systematic and constant genocide. It affects, first of all, the cradle of Christianity – the Middle East ­­– and many other countries as well. Christians are the largest, but at the same time the most persecuted religious community in the world.

– Are you going to discuss with the Russian leadership your meeting with Michael Pence?

– I will report the results of the meeting to His Holiness Patriarch Kirill and, if he deems it necessary, he will convey this information to the Russian leadership. I believe that today Christians in Russia and America can play an important part in the political settlement. During my meetings with the American Christians I saw that they had much liking for both Russia and its president and were willing to pray for the success of the meeting between the Russian and the U.S. presidents.

I know that many Russian Christians have a liking for the current American president. He is in a rather difficult situation, for a considerable part of the political establishment in his country is in the unvoiced or open opposition to his policy. The major mass media, including the CNN, are carrying out a targeted propaganda campaign against him, in which the Russian card is also being played. We can only hope that he will keep his pre-election promises and exert efforts to get the dialogue with Russia on the right track. This dialogue will bring forth nothing but benefit.