Source: CatholicCulture.org
Natalya Mihailova | 04 March 2017
Restoration work at the site of the empty tomb in the Church of the Holy Sepulchre will be finished by Easter, the Franciscan Custody of the Holy Land has announced. 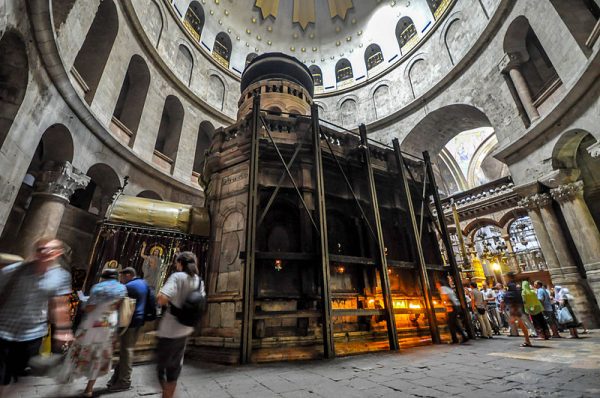 Restoration work on the “Edicule”—the shrine at the site where Jesus was buried—has taken nine months and cost $3.3 million. The costs were borne by the Franciscan Custody, the Greek Orthodox Church, and the Armenian Orthodox Church. Jordan’s King Abdallah II made a personal donation to support the work, as did Palestinian President Mahmoud Abbas. An ecumencial celebration on March 22 will mark completion of the work.

Although the Edicule itself is now stable, experts say that another extensive renovation project is necessary to address the problems that damaged the structure: the excess humidity and smoke from candles in the ancient Jerusalem basilica. The Vatican has promised “substantial” support for that project.

During the restoration of the Edicule, workers who were close to Jesus’ tomb reported odd phenomena, including a “sweet aroma” and malfunctioning of electronic instrucments, suggestive of a powerful electromagnetic force.

Most viewed articles
Strong Orthodox Presence at the 2022 March for Life157
As the End Draws Near – Silence122
Patriarch Porfirije Thanks the Russian Church for Participation in Restoring Serbian Churches116
Do We Act Differently Than Others?108
March for Life participants optimistic for a post-Roe America: ‘This is just the beginning’66
Metropolitan Onuphry: “The Key to the Doors of Paradise is Repentance”57
A Stone Thrown at God and Your Neighbor28
Sunday of the Samaritan Woman2
How We Worship: the Struggle of the American Experience1
The Apostles’ Fast and Theology1
Most popular authors
Pravmir.com team330
Archpriest Stephen Freeman122
Priest Luke A. Veronis107
Ryan Foley66
Protopresbyter Themistoklis Mourtzanos28
Maria Trushanina1