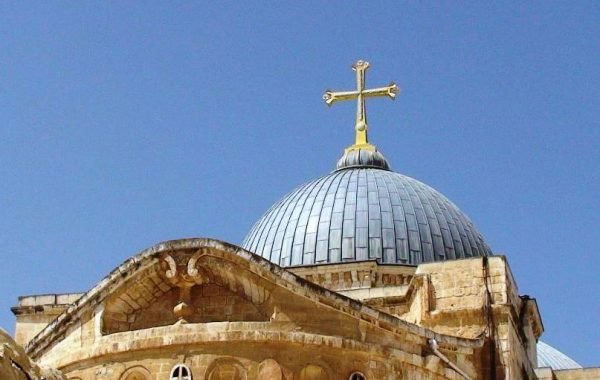 On April 2, 2022, Christian Patriarchs and heads of Local Churches of Jerusalem issued a statement protesting against the seizure of the pilgrimage house “Little Petra”  by representatives of the radical Jewish organization Ateret Cohanim. The Little Petra Hotel stands on the pilgrim route for the millions of Christians who visit Jerusalem each year. As the Heads of the Churches emphasized, this issue is not about the individual properties, but about the whole character of Jerusalem, including the Christian Quarter. The actions of extremists threaten the Christian presence in Jerusalem and, ultimately, the stability of society.

Among those who signed the appeal were the Primate of the Orthodox Church of Jerusalem, His Beatitude Patriarch Theophilos III of the Holy City of Jerusalem and All Palestine, the Armenian Patriarch of Jerusalem Nourhan Manougian, the Apostolic Administrator of the Latin Patriarchate of Jerusalem Pierbattista Pizzaballa and other Christian leaders of the region.

Earlier, on March 29, with regard to the actions of representatives of Ateret Cohanim who illegally entered the building and barricaded themselves inside, a protest rally organized by His Beatitude Patriarch Theophilos III of Jerusalem was held in the Old City in order to draw the attention of the world community to the real threats to which the Christian heritage is exposed in the Holy City and throughout the Holy Land.

The Statement reads as follows:

“Pray for the peace of Jerusalem: ‘May they prosper who love you. Peace be within your walls, and security within your towers.” (Psalm 122:6–7)

The seizure of the Little Petra Hotel by the radical extremist group Ateret Cohanim is a threat to the continued existence of a Christian Quarter in Jerusalem, and ultimately to peaceful coexistence of the communities of this city. The Heads of Churches have repeatedly warned of the illegitimate actions of extremists, who have followed a pattern of intimidation and violence.

In occupying the Greek Orthodox Church’s property, the Little Petra Hotel, Ateret Cohanim has committed criminal acts of break-in and trespass. They act as if they are above the law, with no fear of consequences.

This issue is not about the individual properties, but about the whole character of Jerusalem, including the Christian Quarter. The Little Petra Hotel stands on the pilgrim route for the millions of Christians who visit Jerusalem each year. It represents Christian heritage, and speaks of our very existence in this place.

Israeli radical extremist groups like Ateret Cohanim are already targeting and hijacking our beloved Old City of Jerusalem and imposing their illegitimate and dangerous agenda on all sides. We refuse this and we say: this will lead to instability and tension at the time when all are trying to de-escalate and build trust, to build towards justice and peace. Acts of coercion and violence cannot lead to peace.