Source: DECR
Natalya Mihailova | 20 July 2017
On July 18, 2017, when the Church honours the memory of St. Sergius of Radonezh, Metropolitan Hilarion of Volokolamsk, head of the Moscow Patriarchate department for external church relations, with the blessing of His Holiness Patriarch Kirill of Moscow and All Russia, celebrated the Divine Liturgy at the church of the Descent of the Holy Spirit on the Apostles in the St. Sergius Monastery of the Holy Trinity. 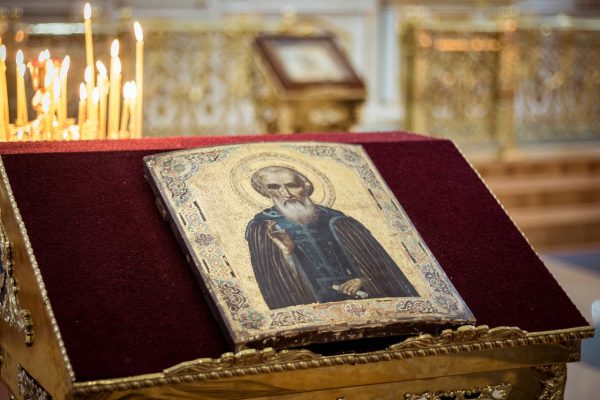 The archpastor was assisted by Bishop Lazar of Narva and Prichudsk, Bishop Clement of Krasnoslobodsk and Temnikovo, Bishop Mstislav of Tikhvin and Lodeinoye Pole, Bishop Paisiy of Schigry and Manturovo and brethren of the monastery.

After the Prayer of Fervent Supplication, Metropolitan Hilarion lifted up a payer for peace in Ukraine.

After the service, His Eminence Hilarion addressed himself to the faithful with an archpastoral homily. He said,

Today we are celebrating the memory of our honourable and God-bearing Father Sergius, abbot of Radonezh and the Wonderworker of All Russia. Every time we are going to celebrate this feast within the walls of the St. Sergius Laura of the Trinity, we come to think what the significance and meaning of monastic life lie in.

Many people who live in the world, especially those who are far from the Church, do not understand what monastic life is and what it is for. Such people would say: Isn’t it unnatural that a person, a man or a woman, should live alone all his or her life without getting married? Didn’t the Lord Himself command: “Be fruitful, and multiply?” (Gen. 1:28). And isn’t it natural for a person to be attracted by nature to the opposite sex?

Who is the true progenitor of monastic life? Various names are given: some say it is Pachomius the Great, while others name Anthony the Great. They also recall the founders of Russian monasticism – Ss Anthony and Theodosius of the Caves.

We glorify St. Sergius as one of the founders and renewers of Russian monasticism. But monasticism began with our Lord Jesus Christ Himself, Who showed the ultimate example of monastic life: He was a perfect Man, like us in everything but sin, as holy fathers say, but He did not marry, did not start a family and had no children. And when once He set forth for disciples His teaching on marriage, the apostles said, “If the case of the man be so with his wife, it is not good to marry” (Mt. 19:10). To this the Son of God replied, “All men cannot receive this saying, save they to whom it is given. For there are some eunuchs, which were so born from their mother’s womb: and there are some eunuchs, which were made eunuchs of men: and there be eunuchs, which have made themselves eunuchs for the kingdom of heaven’s sake” (Mt. 19:11-12).

In monastic tradition our Lord Jesus Christ has always been seen as the true ideal of monastic life and virginal feat. This is why this ideal was emulated by those who decided to follow in our Saviour’s footsteps and rejected temporal life. And the first one was St. Paul who said, “For I would that all men were even as I myself” (1 Cor. 7:7-8), meaning that he did not marry and lived a solitary life, dedicating all his resources to apostolic work.

And after St. Paul there were virgin men and women, as well as widowers and widows who did not remarried – those who decided to dedicate the whole life to God. And in the fourth century this group of people in the Church shaped as monastic movement, as they began leaving cities for deserts and to create monastic communities, which later became monasteries. And it was very rarely that a monastery founded by someone would later fade and die away. As a rule, in each monastery once founded, monastic life would be handed down from generation to generation.

So it was in this holy monastery founded by St. Sergius in the Radonezh primeval forests. With time disciples began coming to the saint in the Monastery of the Life-giving Trinity, and since that time this inflow of people seeking to live a life of fasting has never withered, as for many centuries, from generation to generation, coming here are those who have decided to emulate our Lord Jesus Christ in everything, including in the choice of solitary way of life.

Monasteries began to be closed only when an external force or the godless power decided to close them. After the 1917 Revolution all the monasteries of the Russian Church, including the St. Sergius Laura of the Trinity suffered this fate. But then the Lord showed mercy to our people and the Holy Laura and later many other monasteries began to revive.

All this happened and is happening beneath our very eyes. We can see that the flow of those who seek a life of fasting has not depleted. We can see that many people – young, middle-aged and elderly come to monasteries to live monastic life and emulate our Lord Jesus Christ in this solitary life completely dedicated to God and aimed to restore the image and likeness of God in themselves.

Let us pray to our honourable and God-bearing Father Sergius whom we call the Abbot of the Russian Land that he may always pray for our holy Russian Church and intercede in Heaven for all its monasteries and that monastic life may never grow weak in our holy Church but may flourish as it did in his time and as it does in our days. Amen’.

After the liturgy, His Holiness Patriarch Kirill, His Beatitude Metropolitan Onufry of Kiev and All Ukraine, members of the Holy Synod and all the hierarchs who came to the Laura for the feast, celebrated a thanksgiving in the Cathedral Square before the venerated Icon of St. Sergius of Radonezh.