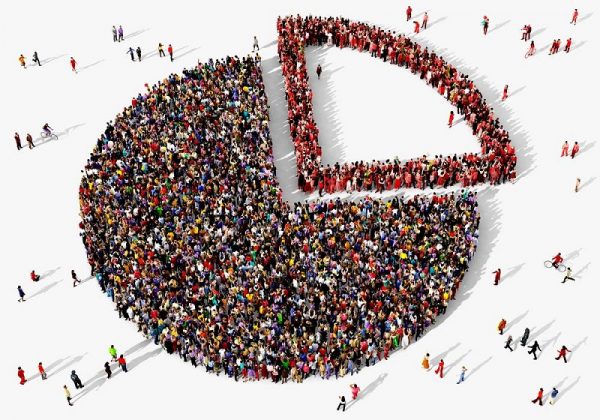 I grew up in a smallish town in Arizona (about 25,000 people at the time). Almost everyone I knew fit into one of four buckets: 1) committed Christians, 2) nominal Christians, 3) those who didn’t call themselves Christians but accepted “Judeo-Christian” values, and 4) Mormons.

In my view of the world at the time, believing in God—and being a Christian specifically—was the default for most people. There were certainly a few kids who fell into other buckets (atheist or New Age), but they were the exception; there was something different about them.

My beliefs were “normal.”

Oh, how things have changed.

According to Pew Forum research on the religious landscape of America, Christians statistically are still the majority. But those statistics are highly misleading because religious categorization is based on self-identification, and the “Christian” category includes a wide range of beliefs and commitment levels.

The Pew Forum, however, just released an eye-opening new method of categorizing America’s religious beliefs, and it reveals a more realistic picture:

From the publicly available data, I don’t see a way to break down the remaining 30% of highly religious people into those who hold beliefs consistent with historic Christianity, so for our current purpose, we’ll just have to say that committed Christians represent some portion of that 30%.

In other words, a minority.

I’ve noticed lately that my subconscious assumption that this has become the case has had a number of implications for how I talk with my kids. For example, some phrases that have regularly worked their way into our daily conversations are “the world tells us,” or “the world would like us to think,” or “the way the world is.” In other words, I find myself constantly placing an emphasis on making sure my kids know that what they are learning to be true about reality is literally opposite of what the world around them—the majority—believes.

This is so different than how I—and many of you—grew up. We were part of a pack. We moved along without having to think much about our beliefs versus those of “the world.” Our parents didn’t have to coach us on why we were so very different…because we weren’t very different. Sure, there were probably some great differences between our homes in how prominently faith actually played out, but we didn’t readily see that on the playground. We didn’t have social media to make the differences abundantly clear. We didn’t have the internet to give us access to the many who are hostile toward our beliefs.

In a world where your beliefs will constantly rub up against opposing views, however, you need parents who will give it to you straight:

Our entire view of reality is unlike the view most others have. We. Are. Different. And that will affect your life in profound ways.

I don’t say this as a mere suggestion that this is a conversation we should have with our kids at some point. I say this believing it’s a critical part of how we approach our parenting every single day.

It has to become a way of life.

Here’s why. When you raise your kids to understand they have a minority worldview, it does three important things:

This is, perhaps, the most important function of all.

If kids expect that their views will be like those of others, they will be shocked when they consistently see how different they actually are.

If kids expect that holding a minority worldview won’t result in sometimes being treated poorly by others, they will be wounded by what they weren’t prepared for.

If kids expect that divergent worldviews won’t lead to heated debates about how our society should best function, they will be frustrated by lack of agreement between Christians and nonbelievers.

But when we consistently help them understand that their worldview will clash frequently with the world around them, they will begin to have very different expectations that lead to healthier outcomes.

They will expect to be different, and not be surprised when they don’t fit in.

They will expect that the world will hate them for their beliefs, and understand that has always been part of what it means to be a Christian (John 15:18).

They will expect that divergent worldviews will often affect their relationships with others, and be motivated to learn how to navigate those differences with both truth and love.

Action point: Find ways to regularly compare and contrast what others believe and what Christians believe. Make sure your kids understand how different their beliefs are, and, importantly, the implications of that—it affects how we see where we came from, why we’re here, how to live while we’re here, and where we’re going. It’s no small matter. You can point this out in movies, song lyrics, news stories, things that friends say, things that other parents say, signs you see, billboards, messages on clothing, and much more.

2. It allows us to emphasize that different isn’t (necessarily) wrong.

Similarly, when kids eventually see that most people believe something very different about reality than what they do, it’s natural to wonder if their minority view must be wrong. Here’s the conversation we should be having with our kids from the time they are very little: different doesn’t mean wrong.

It doesn’t necessarily mean right, either.

The question we must plant firmly in our kids’ hearts and minds is, What is true? The truth about reality isn’t a popularity contest. It’s a question of which worldview is the best explanation for the world around us.

Action point:  Find ways to regularly compare and contrast why others believe what they do and why Christians believe what we do. If we don’t want our kids to assume that different is wrong, they need to have good reason to believe that their different view is right. They need to hear regularly from their parents that Christianity is a worldview based on evidence, and that faith is not blind. If you have kids in the 8-12 range, J. Warner Wallace has three kids books that are amazing for helping them start to think evidentially about their faith: Cold-Case Christianity for Kids, God’s Crime Scene for Kids, and Forensic Faith for Kids (this one JUST came out this month and is a perfect place to start). Even if your kids are a little younger, they can benefit tremendously from reading these with you. My 7-year-old is reading Forensic Faith for Kids and is super excited about doing the corresponding worksheets and watching the videos available for free at www.casemakersacademy.com/forensic-faith/. Honestly, these books should be required reading for every kid in this age range.

Action point:  Encourage your kids to spot the “secular wisdom” all around them. These examples are everywhere but they are, of course, never marked with worldview labels. The more you point out examples, the more kids learn to think critically. When this becomes a habit in your family, your kids will see it on their own and show you examples. We were at a store the other day and my 9-year-old son came around the aisle carrying this sign:

He looked at me with a big, disappointed sigh and said, “Mommy. Look. Love is all you need.”

He recognized this as bad secular wisdom as soon as he saw it. I asked him to explain what’s wrong with it, and he said, “there’s no moral setting.” As I pushed him to explain what he meant, he said there’s no context for making this statement. If God doesn’t exist, then what love means is just a matter of personal opinion—and no one has the authority to state that anything is all you need. I concurred and (gently) hit him on the head, saying, “I could claim that love means hitting people on the head in that case!” But if God exists, then He defines what love is. When we follow the greatest commandment—to love God—it informs what it means to follow the second commandment—to love others. It’s no longer up to us to define the word. This sign means nothing outside of a worldview context—a “moral setting” as my son put it.

It’s clear that being a Christian (or even holding Christian values) is no longer the default. Whether we like it or not, it’s the reality of the world in which we’re parenting. It’s our job to help our kids swim faithfully against the tide so they can be constantly aware of the waves around them and know how to respond.