Confronting the Chaos of the World 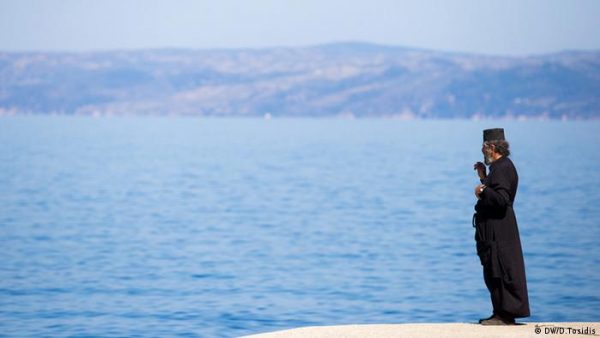 On His way to Jairus’s home, where Jesus was going to heal the temple ruler’s daughter, we hear of a woman who had a flow of blood for twelve years secretly try to grab ahold of our Lord’s garments to be healed.  There was a very specific reason why she tried to be discreet, which comes from the book of Leviticus.  According to Jewish Law, if a woman has a discharge of blood for many days, every bed which she lies on, every garment she wears, every seat she sits on, is considered unclean.  Moreover, if anyone touches her, they too are considered unclean, and need to wash all their clothes, bathe in water, and quarantine themselves until evening (Leviticus, 15:25)!  Knowing all of these laws, it took tremendous courage and faith for the woman in the Gospel to not only go out into a crowd of people, but also to reach out and touch the garment of Jesus!

As soon as her fingers touched the hem of Jesus’s garments, the woman was completely healed.  Our Lord immediately stopped and asked: “Who touched me?”, and this poor woman knew she was caught!  She would have to go and explain herself now, possibly opening Christ up to having to quarantine himself for the rest of the day.

The woman fell down before Jesus, implicating herself, and explain what happened.  Yet after all of this, our Lord replied quite simply: “Daughter, be of good cheer, your faith has made you well.  Go in peace.”  He then continued to Jairus’s house to show his power over death, by raising the daughter from her bed.

These incredible miracles, like so many other passages in the Gospels, show us how Jesus was different than anyone who had come before Him.  He wasn’t just another prophet who healed people or performed miracles after prayer to God.  He IS God!

When confronted with the demoniac, Jesus drove out Legion by His words alone!  He took the hand of Jairus’s daughter who had died and raised her back to life by His own authority!  When a woman with 12 years of blood flow came and touched Christ, He didn’t become sick or unclean, because when we come to our Lord with the sickness of sin, it is we who become healed by the God of all!

How necessary is that authority over evil needed in our own day and age?!  I was reading the very famous work by St. Athanasius this week, who is one of the great Church Fathers of the 3rd century, called “On the Incarnation”.  The book seeks to answer the question of why it was necessary for the Creator to come into the world, and it starts off by describing the fall of Adam and the introduction of sin and death into the human race.

There is a particular passage that I am always struck by because despite being written 1700 years ago, it describes quite vividly what sin has done in our own day and age, and how things seem to continually go from bad to worse!

“When this (the fall) happened, men began to die, and corruption ran riot among them and held sway over them to an even more than natural degree, because it was the penalty of which God had forewarned them for transgressing the commandment.  Indeed, they had in their sinning surpassed all limits; for, having invented wickedness in the beginning and so involved themselves in death and corruption, they had gone on gradually from bad to worse, not stopping at any one kind of evil, but continually as with an insatiable appetite, devising new kinds of sins.”

“Adulteries and thefts were everywhere.  Murder and rapine filled the earth.  Law was disregarded in corruption and injustice.  All kinds of iniquities were perpetrated by all, both singly and in common. Cities were warring with cities.  Nations were rising against nations.  The whole earth was rent with factions and battles, while each strove to outdo the other in wickedness.  Even crimes contrary to nature were not unknown, but as the martyr-apostle of Christ says: “Their women changed the natural use into that which is against nature; and the men also, leaving the natural use of the woman, flamed out in lust towards each other, perpetrating shameless acts with their own sex, and receiving in their own persons the due recompense of their pervertedness.””

St. Athanasius gives us this very gruesome image of what happens to the human race when it turns away from God.  We go from bliss to despair…from paradise to hell…and from life to death.  Yet, despite how far the human race has fallen, we are so incredibly blessed to have a loving God Who could not bear to see His own creation destroy itself.  St. Athanasius continues:

“…pitying our race, moved with compassion for our limitation, unable to endure that death should have the mastery, rather than that His creatures should perish and the work of His father for us men come to naught, (in other words, so we wouldn’t end up in oblivion) He took to Himself a body, a human body, even as our own…This He did out of sheer love for us, so that in His death all might die, and the law of death thereby be abolished…”

Brothers and Sisters, this is what God came into the world to do!  He came to sanctify our flesh!  He humbled Himself down to our existence to pull us out of corruption and death, to pull us out of that scene which we just read above, and just like the woman in the Gospel today, to make us whole again!

Knowing this incredible reality, how have we changed our lives as Orthodox Christians to make the most of this selfless gift of love?

When we wake up in the morning, are we thinking about God and the necessity of prayer, or is our first instinct to see what emails, texts, and social media posts we missed?

When we speak with others throughout the day, do we begin our conversations by praising God for the day we have been given?  With other Orthodox Christians, this is easy!  We greet one another with “Glory be to Jesus Christ!  Glory Forever!”  Do we do the same with non-Christians, thus showing the rest of the world how deeply connected we are to our Savior?

When sickness comes upon us, or we are about to have surgery, is our first reaction to turn to God and to reach out for the hem of His garment? Or do we first turn to Web MD to further obsess over things that are beyond our control?

When we go to Liturgy, is it just a place that we go to have coffee afterwards, hear the choir, listen to a homily, and have Christian fellowship…or do we truly allow ourselves to be transformed?  Do we come to take all of the Grace that we received, so that we can take it out into the world, in order to save it from itself…or do we quickly fall back into the arms of the world, thus losing the incredible gift that we had received?

Self-examination like this helps all of us to realize where our true priorities lie.  As Orthodox Christians, if we are lacking in any of these areas, this needs to change now, before it is to late.

Last week, I was fortunate to visit St. Mark’s in Rochester Hills, who was hosting the miracle working Icon of St. Anna.  Fr. Sergius, abbot of St. Tikhon’s Monastery in Pennsylvania, said after the service that the reason God allows miracles in our life, just like the miracle working icon that wept myrrh and healed so many for years that was before us, is to remind us that “all of this” (the Grace we receive from the Liturgy, the miracles, our faith, etc) is absolutely real and necessary if we are going to fulfill our Christian calling, and to change the world.   The healing presence of Christ in our lives is absolutely necessary, if we are to make the most of the gift of life and love that we have been freely given.  Knowing that reality, let us not waste another moment of our lives without giving Glory to Him who has come to transform us and the rest of the world through us…Amen.