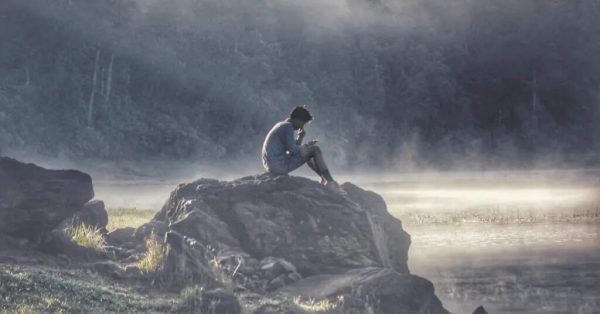 God does not call us out of chaos; He calls to us from within the chaos to order the world (cf. Genesis 1:28).

A raging tempest, howling demoniacs, stampeding pigs, and indignant mobs – the gospel reading of the legion of demoniacs is anything but calm and balmy. One storm follows another, and right there in the storm, who do we find? Jesus Christ. Christianity does not offer a life without storms. It offers us a focus in the storm.

“When he was entered into a ship, his disciples followed him. And, behold, there arose a great tempest in the sea, insomuch that the ship was covered with the waves” (Matthew 8:23).

The Jews generally did not take to the sea. The ocean, as a symbol of chaos, appears from the start to the end of Scripture. Genesis describes God molding creation out of a dark, watery chaos. “Darkness was over the surface of the deep.” Genesis 1:2 depicts a desolating, primordial abyss. Noah’s flood, the consequence of sin, ushered in a return of that chaos, when the waters wiped away civilization. King David echoes this sentiment; staring head on at the chaos of life, he prays, “Save me, O God, for the waters have come up to my neck …. I have come into deep waters, and the flood sweeps over me” (Psalm 69:1–3).

Chaos is certainly not foreign to us today. In the 80s and 90s, and even into the first decades of the 21st Century, our culture at least believed life was stable. There were shared norms and expectations. People with different political opinions or worldviews could sit down together for lunch. We were optimistic then. Nowadays, it feels like the floor has collapsed under our feet. Several years back, Fr. Seraphim Rose foresaw what he called a growing “cancer of nihilism” in the West, a cancer characterized by a desperate desire to escape: “an escape from boredom, from meaninglessness, and most profoundly from the emptiness that takes possession of the heart that has abandoned God.” As God brought order and life into the chaos, so our life, when we banish God, returns to its former state. In such times, we all identify with King David: “Save me, O God, the waters have come up to my neck.”

The disciples found themselves here, in the midst of this chaos, when they cast out to sea. “There arose a great tempest in the sea, insomuch that the ship was covered with the waves: but he was asleep. And his disciples came to him, and awoke him, saying, Lord, save us: we perish. And he saith unto them, Why are ye fearful, O ye of little faith? Then he arose, and rebuked the winds and the sea; and there was a great calm” (Matthew 8:24–27).

Where are the storms? They are in our heart. The circumstances around us do not matter so much. The wars, the economic instability, our health, none of it comes to that much in the end. We spend the majority of our life wrestling with anxiety or fear about imaginary possibilities. Our thoughts are far greater enemies than the Taliban or the Chinese Communist Party. The real storm is inside us.

“Lord, save us, we perish.” The disciples could have easily drowned. At a time when everything is caving in, and the waves are pouring into your boat, it is tempting to forget everything else and despair. This is a perfect image of the way our fears overwhelm us. The disciples, however, turned to Christ. They shook him violently. “Wake up. Help us.”

“Why are ye fearful?” He awoke. He rebuked the chaos, and a calm followed. We cannot blame God for the chaos in our lives. We must simply learn, in the midst of that chaos, to focus on Christ.

“And when he was come to the other side into the country of the Gergesenes, there met him two possessed with devils, coming out of the tombs, exceeding fierce” (Matthew 8:28).

Right after the first storm came another. How would modern psychiatry diagnose these men? Schizophrenia, multiple personality disorder, bi-polar, whatever the situation, the severity of psychological and spiritual disorders can be devastating. Beneath the disease, these were people, real men, with parents, beautiful memories, and terrible wounds. They embodied what so many of us today struggle with, in our own conditions, among family members, or loved ones.

Christ shows up here too, in the psychological storm, and he brings peace. Next, the swine foamed at the mouth and charged off the cliff. Then the townspeople showed up and drove the disciples away. The storms keep coming. The rest of history is a long story of trials and struggle. Yet, in all of it, Christ is present, waiting for us to return to Him.

God calls to us within the chaos. Writing about the storms, St. Isaac the Syrian gives us this advice: “Let this be for you a signpost: the strength of the temptations you encounter. The nearer you draw and progress, the more temptations multiply against you…. Without trials God’s providence is not seen, and you cannot obtain boldness before God, nor learn the wisdom of the Spirit, nor can divine longing be established in you…. [At these times] when someone is darkened, he ought to fall on his face in prayer, and not rise up until power come to him from heaven and a light which will support his heart.”

We want life to be smooth sailing. God lets it get rocky instead, so we learn to turn to Him.

“Trust in the LORD with all your heart and lean not on your own understanding; in all your ways submit to Him, and He will make your paths straight” (Proverbs 3:5–6).

This article was published in the May/June 2022 edition of The WORD magazine.

What Do We Make of the Western Rite?

When I first stepped into a Western Rite parish, I nearly walked out in the middle of the…