We are too scattered, too distracted and too burdened with the cares and pleasures of life. Faith has no time and place to take root and grow in us. We are far from renunciation and detachment. And forget focus, this thing the Holy Fathers call vigilance, watchfulness and guarding the heart! We can barely remember what we had for dinner last night, much less are we able to bring our full attention to bear on living authentically moment by moment in Christ.
Archpriest Antony Hughes | 19 November 2011

Sermon the 23rd Sunday after Pentecost

In the Name of the Father and of the Son and of the Holy Spirit, One God. Amen.

When Jesus returned from the country of the Gerasenes where the episode with the demoniac and the herd of swine took place a crowd welcomed him. He had been teaching and working miracles all around Galilee so, of course, people thronged to see him wherever he went. All of these wonderful things began to happen right after Jesus was baptized and was tempted by Satan in the wilderness for forty days. Luke writes that he returned to Galilee from the desert “in the power of the Spirit” and the fruit of that power is what we see in today’s Gospel reading.

Jairus, an official of the synagogue, approached the Lord in great distress. His only daughter, a young twelve years old, was dying. He fell to his knees before Jesus begging him to come save her. The pathos of this scene is palpable. Of course, Jesus, the All-Compassionate One, responds immediately and begins to go with Jairus to his home. Luke comments that the crowd was so large it nearly crushed him.

In the midst of this, Luke writes that a woman who had suffered from an hemorrhage for twelve years stole her way through the massive crowd and managed to touch the hem of the Lord’s garment and was healed. Luke must have interviewed the woman after the incident because he fills the story with such wonderful detail. What a unique and telling moment this is in Scripture!

This woman, unclean by the standards of the Mosaic law and liable for stoning should she be discovered, throws all caution to the wind in her desperation and reaches out in all-consuming faith, to touch his garment. Then (can you not imagine this scene) Jesus comes to a halt and exclaims, “Who touched me?” He must have used a loud voice since the crowd was certainly noisy and otherwise he couldn’t have been heard. Peter, as is so often the case, is perplexed by the question, “What do mean, ‘Who touched me’, the crowds are pressing all around you. Many people are touching you!” “No, Jesus, replied, “someone has touched me; for I know that power has gone out from me.” 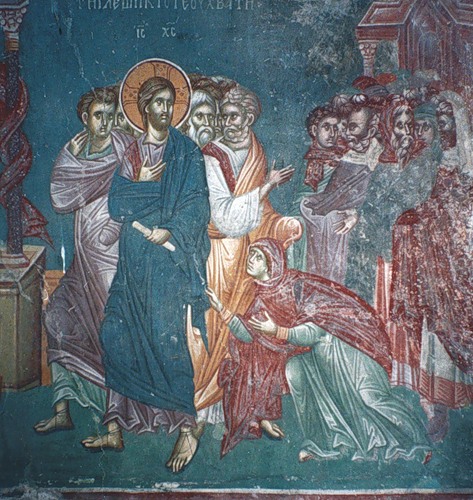 One, I believe it was because she was focused on her goal, undistracted by the crowd, its noise and size, the pushing and shoving, or from the fear of being discovered (an unclean woman was forbidden to be in contact with the ritually pure), undistracted even by her own suffering. Her mind was simple and clear: touch his garment and you will be healed.

Secondly, I believe it was her faith. Jesus tells us that her faith was what made her whole. She believed even after twelve years of physical suffering and of enduring the label of social pariah that the Lord would heal her. In fact, it may well have been her suffering that gave birth to the rich faith she brought to the scene. Suffering can inspire the deepest kinds of faith. I would love to have a glimpse at her life during those twelve years. How did she pray, how did she express her piety, how exactly did the suffering help to purify her heart, simplify and clarify her mind? What was her response to all of it that brought forth such pure faith?

Thirdly, she was uniquely prepared for the encounter; her long suffering had prepared her to meet the Incarnate God. She literally had nothing to lose. She had abandoned all feelings of shame, of fear, even of “being and non-being” as Dionysios the Areopagite writes in mystical language. She passed beyond everything, including herself, with single-minded purpose to touch the hem of His garment. So, she becomes a model of the spiritual life for all of us. She fully incorporated in herself the essential mystical elements of renunciation of self and the world and detachment from everything in them.

Many scriptures point to the need for single-minded faith and undistracted focus. “Whatever you ask in my Name, not doubting” will be done, Jesus says in one place. “Ask and ye shall receive, seek and ye shall find, knock and the door shall be opened.” Did this woman not ask, did she not seek, did she not approach the Door Himself and knock, did she not deny herself radically as Jesus asks all of us to do.

Whatever else she may have offered Christ that day, she at least offered three things, clarity of focus, courageous faith and utter self-denial. She had little else to give than these natural things developed in her through suffering, which are also available to all of us through the gift of God’s image and of the Holy Spirit within. The wedding of her offering and the divine grace in Christ brought forth a miracle, as it does whenever a person hones and develops their natural God-given attributes and calls upon His Name.

The combination of divine grace and human will is explosive. It is what St. Paul meant when he wrote that we are “co-workers with Christ” (synergy) and that we must “work out our salvation with fear and trembling.” We have a contribution to make to our own salvation.

Perhaps this is a key to understanding the emptiness of our own spiritual lives and practice. We are too scattered, too distracted and too burdened with the cares and pleasures of life. Faith has no time and place to take root and grow in us. We are far from renunciation and detachment. And forget focus, this thing the Holy Fathers call vigilance, watchfulness and guarding the heart! We can barely remember what we had for dinner last night, much less are we able to bring our full attention to bear on living authentically moment by moment in Christ. And self-denial? Fat chance in this society of ours where the ultimate and utterly insipid goal, is to become an American Idol! But without these things we will always be adrift spiritually. The element most unsettling to us in the teaching of Christ is the commandment to “Take up your cross and follow me.”

Believe me, my friends, these things can be learned. There is training that must be done, training of our minds and hearts and bodies. Meditation, prayer, vigilance, self-denial. The image of the spiritual athlete in St. Paul’s writings is the image we need to take away from the Gospel today. The Woman with the issue of blood is to me an image of the spiritual athlete. Her life of renunciation and detachment is something every one of us needs to seriously contemplate and embrace.