Constantinople Sees No Threat of Schism due to Ukrainian Autocephaly 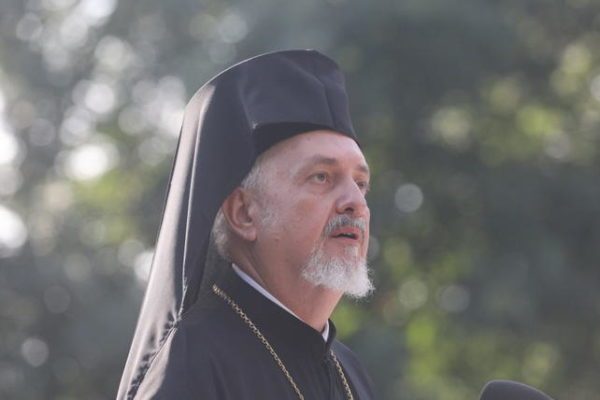 The Patriarchate of Constantinople sees no threat of a schism in the case of granting autocephaly to Ukraine, as Churches now live “in an era of communication and information, and any problems can be discussed in detail,” His Eminence Metropolitan Emmanuel of Gaul said in a recent interview with the Greek newspaper Ethnos, reports RIA-Novosti.

His statement comes, however, after the Russian Church has already announced that it would break communion with the Ecumenical Patriarchate if it grants autocephaly.

As the newspaper notes, Met. Emmanuel is considered one of His All-Holiness Ecumenical Patriarch Bartholomew’s closest and most trusted collaborators. He attended the August 31st meeting between Pat. Bartholomew and His Holiness Patriarch Kirill, though he declined to divulge the content of their meeting.

“With the April 2nd decision of the Holy Synod of the Ecumenical Patriarchate, the intention of the Mother-Constantinopolitan Church to accept the request of the Ukrainian people for autocephaly became known. From that moment began the process of informing the other autocephalous Orthodox Churches, and also of the differing position of the Moscow Patriarchate in relation to the proclamation of Ukrainian autocephaly,” Met. Emmanuel stated.

The Ecumenical Patriarchate initially announced in late April that it had “decided to closely communicate and coordinate with its sister Orthodox Churches concerning this matter.” However, as those sister Churches soon found, the purpose of the visits of the Constantinople representatives was not to dialogue and coordinate, but rather to inform that Constantinople would be granting autocephaly, even without the support of a single Local Church. Nevertheless, the same Met. Emmanuel told Russian Church officials in May that Constantinople would not be granting autocephaly.

Although the Ecumenical Patriarchate is now claiming that Ukraine is within its canonical jurisdiction, it recently appointed two new exarch bishops of Kiev, setting up another ecclesiastical structure there. The Russian and canonical Ukrainian Churches have protested this move, with the Russian Church announcing that it would break communion with the Ecumenical Patriarchate if it grants autocephaly to the Ukrainian schismatics.

Asked whether the decision to grant autocephaly would affect Constantinople’s relations with the largest Orthodox Church in the world, Met. Emmanuel said that the Phanar does not act on the basis of its own interests or political pressure.

“All problems will be solved, and we will never reach such radical divisions and isolation,” Met. Emmanuel added, apparently without regard to the Russian Church’s own statement.

The metropolitan did not stipulate when the tomos of autocephaly would finally be given, but affirmed that “the Patriarchate of Constantinople does not intend to postpone the solution of the Ukrainian problem, and … this is a priority.”