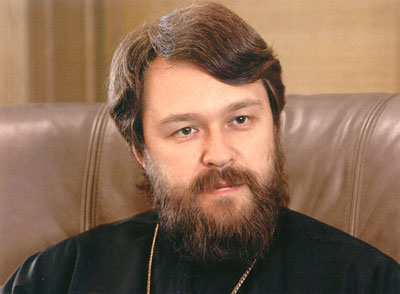 – Your Eminence, the Bishops’ Council of the Orthodox Church of Greece begins its work today. As expected, discussed at the Council among other topics will be the ecclesial situation in Ukraine and the crisis it caused in the relationships between the Russian Church and the Patriarchate of Constantinople. What do you deem important to say in view of the forthcoming discussion of the Ukrainian issue by the hierarchs of the Church of Greece?

– The Ukrainian autocephaly was the main topic of the letter sent yesterday by His Holiness Patriarch Kirill of Moscow and All Russia to His Beatitude Archbishop Hieronymos of Athens and All Greece. Set forth in it is the position of the Russian Church on this issue, and I suppose that the letter will be discussed at the Council of the Church of Greece.

Since, as I have already said, the Ukrainian Orthodox Church did not ask for the autocephaly, the exarchs’ immediate task is to pave the way for creating a new, parallel structure in Ukraine, which would include schismatics and would be granted a tomos of autocephaly. It is this structure that is supposed to adopt the name of the Ukrainian Orthodox Church. There is an intention to take away this name beforehand from the existing canonical Church led by Metropolitan Onufry of Kiev and All Ukraine by means of adopting special discriminatory bills prepared for this purpose by the Verkhovna Rada.

Representatives of the Ukrainian governmental authorities openly state that the Ukrainian Orthodox Church will be forcibly renamed Metropolia of the Russian Church in Ukraine. Therefore, the schismatic leaders claim that it will lose its legal rights over the churches and monasteries belonging to it now, including the major shrine of the Ukrainian Church – Kievan Lavra of the Caves.

All this means that the majority of the Orthodox Christians will become outcasts in their own country and that church buldings and monasteries will be taken away from them on a massive scale – and not by violent means as it has been done so far, but on allegedly lawful grounds.

– Were not the similar actions taken at a time when the autocephalies of the Church of Greece, the Romanian Church and other Churches that received autocephaly from Constantinople in the 19th century were proclaimed?

– In the case of Greece, Romania, Serbia and Bulgaria it did not involve the establishment of a consisting of schismatics, parallel autocephalous structure in circumvention of the existing canonical Church. However, this is what they are planning to do in Ukraine. Therefore, the granting of the tomos to the Ukrainian schismatics – should it be granted after all – will in fact mean not the autocephaly, but the legalization of the schism. We know that there are different approaches as to who in the Orthodox Church is authorized to grant autocephaly. However, it is obvious to everyone that the sacred canons do not confer on anyone the right to legalize a schism.

The actions taken by the Church of Constantinople, as well as the statements of its high representatives implying that the process of autocephaly in Ukraine will be carried through, forced the Russian Orthodox Church to take retaliatory measures. In the face of a blatant encroachment on the integrity of the Russian Church’s canonical territory, on the 14th of September its Synod resolved to suspend the liturgical commemoration of His Holiness Patriarch Bartholomew and the con-celebration with hierarchs of the Patriarchate of Constantinople.

The Synod also adopted a statement which presents the historical facts indicating that the ecclesiastical belonging of the Kievan Metropolia to the Moscow Patriarchate is indisputable, no matter what attempts are being made to review the church history now, 300 years after their reunification.

The statement calls upon the Local Orthodox Churches to initiate a brotherly pan-Orthodox discussion of the ecclesial situation in Ukraine. Why is it necessary now? Firstly, the granting of the autocephalous status is the concern of the entire Orthodoxy, not of one Church only. Secondly, the granting of the tomos to the schismatics will have catastrophic consequences for the Orthodox unity. According to the Orthodox ecclesiology, one cannot be in the Eucharistic communion both with the canonical Church and with those who fell away from it. Such a step will lead to the complete break in communion between the Patriarchates of Moscow and Constantinople, and this rift will be hard to overcome.

I am acquainted with many hierarchs of the Orthodox Church of Greece and believe that most of them take to heart what is going on in regard to the so-called ‘Ukrainian autocephaly.’ Many of these hierarchs have been to Ukraine and to Russia; many of them have received pilgrims from the Moscow Patriarchate – from both Russia and Ukraine. We have reached a dangerous point, but I still have a hope that Their Eminences and Graces the archpastors of the Church of Greece will devote special attention to the current critical situation and will do all in their power to initiate the pan-Orthodox discussion of the Ukrainian church issue, for the further unilateral actions in relation to the Ukrainian autocephaly can lead to the most tragic consequences for the unity of the entire Holy Orthodoxy.