Source: DECR
The reaction of the Moscow Patriarchate will follow at the earliest possible date.
Pravmir.com team | 09 September 2018 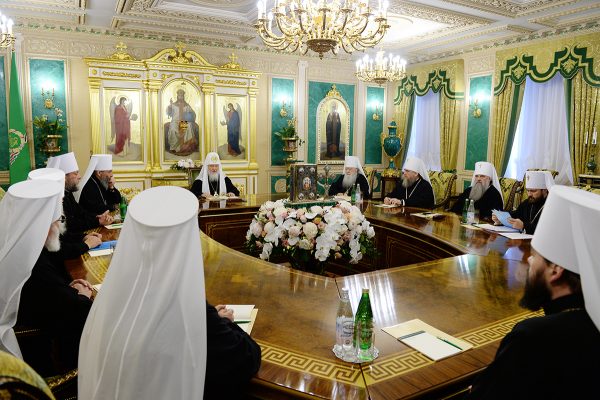 The Holy Synod of the Russian Orthodox Church expresses its resolute protest against and deep indignation at the communique published on September 7, 2018, by the Chief Secretariat of the Patriarchate of Constantinople Holy Synod announcing the appointment of two hierarchs of this Church – Archbishop Daniel of Pamphilon (USA) and Bishop Hilarion of Edmonton (Canada) as ‘exarchs’ of the Patriarchate of Constantinople for Kiev.

This decision has been adopted without an agreement with Patriarch Kirill of Moscow and All Russia and Metropolitan Onufry of Kiev and All Ukraine and has constituted a gross violation of the church canons prohibiting bishops of one Local Church to interfere in the internal life and affairs of another Local Church (Second Ecumenical Council Canon 2; Council of Trullo Canon 20; Council of Antioch Canon 13; and Council of Sardica Canons 3, 11 and 12). It entirely contradicts the up-until-now invariable position of the Patriarchate of Constantinople and personally Patriarch Bartholomew, who has repeatedly stated that he recognizes His Beatitude Metropolitan Onufry as the only canonical head of the Orthodox Church in Ukraine.

The Patriarchate of Constantinople’s decision to admit to examination the issue of granting autocephaly to ‘the Orthodox faithful of Ukraine’ has been made against the will of the episcopate of the Ukrainian Orthodox Church, who have unanimously spoken for the preservation of her existing status.

To justify its interference in the affairs of another Local Church, the Patriarch of Constantinople has produced false interpretations of historical facts, referring to his alleged exclusive powers, which he actually does not have and has never had.

These actions lead the relations between the Russian Church and the Church of Constantinople to a deadlock and create a real threat to the unity of the whole world Orthodoxy.

The Holy Synod of the Russian Orthodox Church states that the full responsibility for these uncanonical actions falls personally on Patriarch Bartholomew and those persons in the Church of Constantinople who support these actions.

The reaction of the Moscow Patriarchate will follow at the earliest possible date.