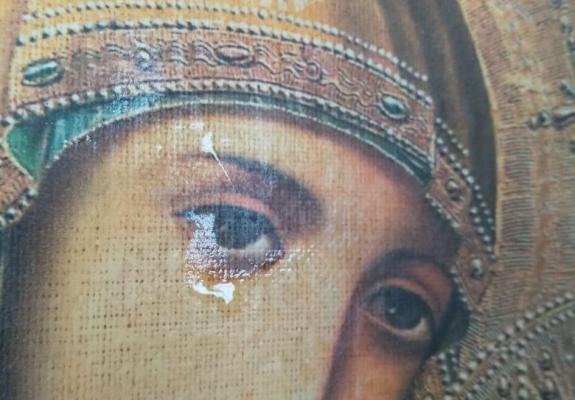 A miracle occurred on July 9, the feast of the Lviv Tikhvin Weeping Icon of the Mother of God, as a copy of the wonderworking icon began to stream myrrh.

The Lviv Tikhvin Icon is kept in the Cathedral of St. George in Lviv, and the myrrh-streaming copy is located at the Church of St. Amphilochios of Pochaev in Mostiska, 40 miles west of Lviv, reports the Lviv Diocese of the Ukrainian Orthodox Church.

With the blessing of His Eminence Archbishop Philaret of Lviv, the rector Archpriest Nicholas and the community served a paraklesis with an akathist to the Most Holy Theotokos.

Fr. Nicholas is continuing to keep an eye on the icon. The original Tikhvin Icon of the Mother of God was painted by the Evangelist Luke and sent to Antioch. It was later moved to Jerusalem, and in the 5th century to Constantinople, where it remained until the 14th century, when it appeared on the territory of Kievan Rus’.

Later, a copy of the icon was painted and blessed on Mt. Athos and given to the Russian Imperial Consulate in Lviv. This copy became known as the Lviv Tikhvin Weeping Icon of the Mother of God.

In 1997, at the recommendation of His Grace Bishop Augustine of Lviv, the icon was officially acknowledged as miraculous by the Holy Synod of the Ukrainian Orthodox Church and is now celebrated every year on June 26/July 9.