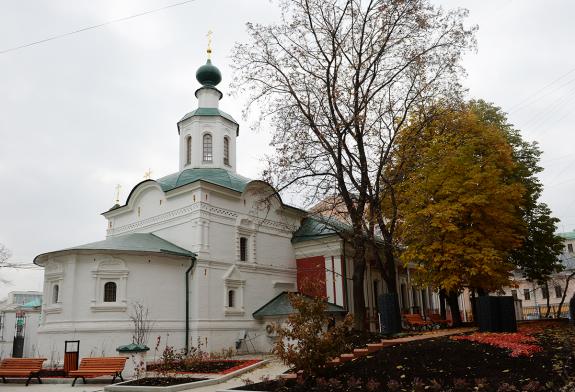 A Kazan Icon of the Mother of God in the Church of the Beheading of St. John the Baptist in central Moscow has been intermittently streaming myrrh since 2016.

The icon streamed for the fourth time on the feast of Nativity of the Mother of God on September 21, His Eminence Metropolitan Hilarion of Volokolamsk told RIA-Novosti yesterday.

Daily akathists are being served before the icon throughout October in thanksgiving to the Mother of God for the mercy shown to the community.

“In this church, there is a Kazan Icon of the Most Holy Theotokos—it is myrhh-streaming,” Met. Hilarion said, in the Church of St. John, where his Sts. Cyril and Methodius Orthodox Postgraduate and Doctoral School is located.

The third case occurred in November 2018 on the feast of the “Joy of All Who Sorrow” Icon of the Mother of God that is located in a church of the same name just a few minutes away, where Met. Hilarion serves as rector. The feast of the Nativity of the Mother of God at the Church of St. John. Photo: doctorantura.ru

OrthoChristian reported on two myrrh-streaming icons in Ukraine in July: a copy of the Lviv Tikhvin Weeping Icon of the Mother of God in Mostiska, and of St. Nicholas in Gnatovka in the Rivne Province.