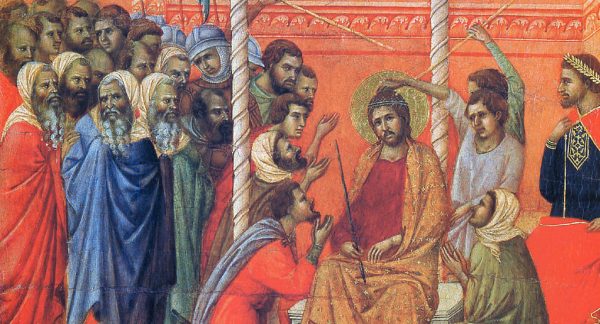 And so it happened… The very people who greeted Jesus as He entered Jerusalem, shouted “Crucify Him” five days later. There is some strange and terrifying inconsistency in this sudden change of attitude. Although if we think about it, it is not so surprising.

People most often judge each other by social markers: a certain set of opinions about someone. So did the people of Jerusalem: they heard about the Teacher who was able to raise the dead, decided that He was the Messiah, and went out to meet the long-awaited King with palm branches in their hands. Then they saw the same Teacher beaten, fettered, condemned to death, and they agreed with this marker too. By the way, I do not think that everyone shouted “Crucify Him”. Like in any crowd, there must have been several loudmouthed claqueurs, while the rest of the crowd simply agreed in silence, as it usually happens in such cases.

The crowd’s opinion is highly volatile. It must be also noted that their situation was of an intense national and religious conflict. Five days earlier, they met not just a king, but someone who came to fight with the existing power of the invaders and the Sadducee high priests, to defeat this power and reign over the liberated people. The people believed that He was the Messiah and hoped for His miraculous power. Then suddenly they saw that He showed no power; on the contrary, He had given Himself to be bound, beaten, and spat on… What could they think of such a “king”?

There is another source of confusion, which can often be heard in conversation about those tragic events: “People were offered to release the One who had healed and brought people back to life, and for some reason they preferred Barabbas, the robber, instead. That is, not the One who could help people, but the one who robbed them. What’s the point? The Healer could still help them in the future.”

Meanwhile, there was logic in it. In order to understand it, we must try to look at the situation not from the present perspective, but from that terrible Friday, when people were standing in front of the platform on which Pilate judged the unfortunate king of the Jews. They must have been thinking, “Why release someone who could not even help Himself? What is the use of Him? Perhaps all that was said about Him was empty rumors and nothing more. Barabbas is not just a robber, he is a fighter against the regime, a revolutionary, a zealot. He fights for freedom against the invaders; he kills them; he’s ready to sacrifice his life. What else is there to think about? Make them release Barabbas!”

That’s how it happened. Simple and scary. Nothing personal, it was just pure expediency. Where people were waiting for an earthly king, no one needed the feat of the King of Heaven. He had an agonizing execution, death, and the descent into hell ahead of Him. He had two whole nights before the Resurrection, which would open the way back to God to those poor, spiritually blind people . To the very people, who met Jesus with palm branches in their hands five days earlier. To the very people who shouted “Crucify Him!” five days later. To the most ordinary people. To all of us.

Psychologist Alexander Tkachenko speaks about identifying pride at its roots.