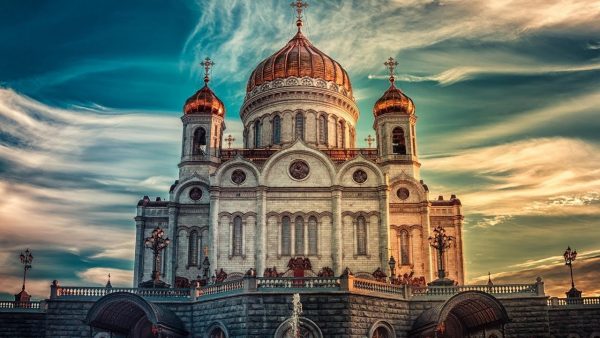 Photo: Christ the Saviour Cathedral in Moscow, imploded by the Soviets, and rebuilt by faithful Russian Orthodox Christians.

“What began in Russia will end in America.” ~Elder Ignatius of Harbin, Manchuria

As an American I have clearly seen, over these past forty years or so, a secularization of our who nation, with the end result that evil is taking root. Consequently, the American people are being deceived by an atheism that is ripping our own country from us. America is becoming like the Soviet Union, while Russia is becoming the Christian land America once was.

We American’s are witnessing a progressive extinction of our traditional public and educational institutions, watching to our horror, traditional values replaced with all manner of perversion. Our once proud institutions are now becoming corrupt, just as violence, decadence, and insanity are increasing.

Marxist ideologies and secularist principles are changing our once Christian culture, leading to the state sponsored pressures that will ultimately take away our individual freedoms and liberties.

Alexander Solzhenitsyn, in his “Godlessness: the First Step to the Gulag”, referenced how the communist takeover of Russia was preceded by an atheistic mentality that lead to the secularization of Russia, therefore alienating the Russian people from their traditional Christian morality and beliefs. Solzhenitsyn rightly concluded Russia was open to atheism and anti-Christian morality because “Men have forgotten God”.

It is all the more imperative that we fervently pray for our country, and give witness to the importance of Christ in our lives. The secularization that is taking place must not be allowed to take hold, but must be pushed back by us. We must stand firm against this radical takeover, and as warriors for our faith, battle against the destructive power of the evil enemy of our salvation.