Secularism: When You Can’t Even Talk about God 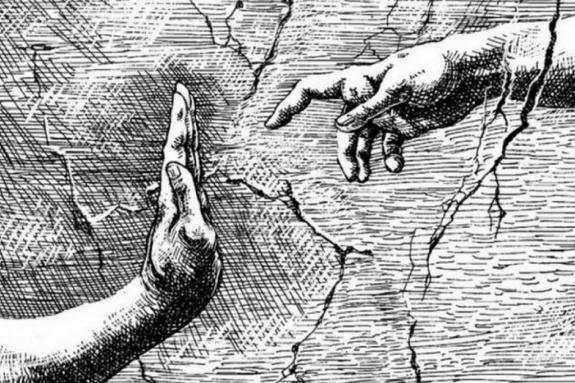 I talk to a neighbor. I listen to people speaking English in a language group. I observe the work of masters at the bus station and laconically answer questions. I’m a little bored and sad. Here it is not customary to talk about God and even keep silent about Him. People refuse to make Him a companion of all their affairs. Or even refuse Him at all.

“If you cannot talk about God with a man, there is nothing to talk about with him.” It is a frightening and at the same time true inner conviction for the believer. It’s contradictory, at first glance, and fundamental, if you look deeper. Bishop Andrei (Ukhtomsky) once wrote that he was struck by what useless activities and conversations seemingly educated and worthy people fill their day with. If there is no God, everything is in vain.

Everyday secularism, which is apparently the result of the Soviet struggle against religion, is familiar to every believer. Surely you often came across a situation when you suddenly got bored at a secular corporate party or an ordinary feast. You tried to understand why, at another feast of life, they were discussing purchases and acquisitions, well, maybe people, but not gospel parables, the theory of creationism or, at least, the change of the ruling bishop. An attempt to raise the topic of religion, by the way, sometimes brings interesting results: in 5-10 minutes, in some sense, you understand the world view of the person you are talking to. In fact, the religious theme is the most acute of the existing ones, therefore, talking about God, you can very quickly “pull” a tangle of contradictions from a person onto the surface of the conversation, which for some time was hidden very deep.

At some point, you can clearly understand that you are sitting at the table with pagans. Well then, why not? And the conversation about religion soon gradually ends. But this doesn’t always happen. More often, though, people don’t really want to talk about God. Socio-political events, the tragedy of personal life and the new Tarantino film will be better received by the partner in conversation than talking about the eternal. Here, by the way, is one of the answers to the question about the Church oppositionists and, in general, aberration of a certain part of society who “softly” struggle against the Church (i.e. against God). People do not want to let Him into the space of their life.

This is, in general, a free fall choice. The problem is when an atheist sees domes of a temple and the noble appearance of a Christian met on the street his pride is wounded. He himself does not realize why every time a reminder of God causes a storm of emotions in him. In fact, the awakening voice of conscience instantly encounters an overweening pride. The ongoing struggle on the surface gives rise to anger and discontent. Self-esteem quickly crushes the already beaten conscience.

But secularism has two sides. One of them really lies in the “field” of non-church people. And the other one is among Orthodox Christians. It seems that we have already learned to write religious popularizing texts and film cool videos about the 10 commandments or 5 rules of a saint’s life. Perhaps it’s time to add live sermon to this information weapon. The word ‘sermon’ today can sound loud, pompous, beaten and at the same time binding. But in fact, everything is much simpler. The real sermon will be in comforting the sad with the words “God will not leave you”, farewell words “God help you!”, heartfelt gratitude with saying “God save you.” We are able to put God back on the agenda. We have all the strengths and opportunities for this. We should start boldly talking about the Lord with people, without imposing anything, but also refusing to impose on us the fate of fragmented life, where our faith is a social taboo and a personal Sunday “hobby”.