Delegation of the ROC attends “Bridges of Peace” meeting in Bologna 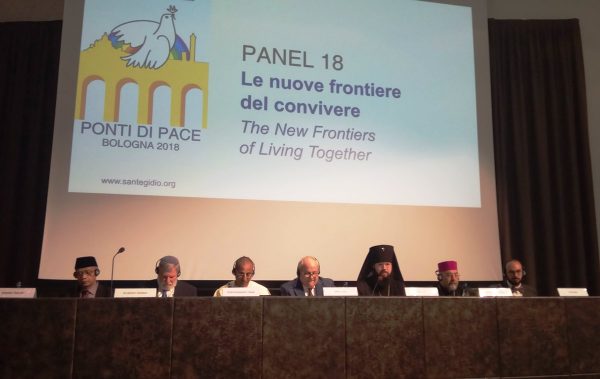 The “Bridges of Peace” international forum took place in Bologna, Italy, on October 14-16, 2018. The annual meeting is sponsored by the Catholic community of Sant’Egidio.

Taking part in the meeting with the blessing of His Holiness Patriarch Kirill of Moscow and All Russia was the delegation of the Russian Orthodox Church led by Archbishop Antony of Vienna and Budapest, head of the Moscow Patriarchate’s Administration for Institutions Abroad. The delegation included Bishop Nikolai of Vasilkov, a vicar of the Metropolia of Kiev; Archpriest Nikolai Danilevich, deputy chairman of the Department for external church relations of the Ukrainian Orthodox Church; and Hieromonk Stefan (Igumnov), secretary for inter-Christian relations of the Moscow Patriarchate’ Department for external church relations.

On October 16, Archbishop Antony presented a report at a panel discussion. While talking about positive experience of inter-religious cooperation in Russia, he underscored that the country had never known any inter-religious wars and that the leaders of traditional communities in Russia had given unanimous and resolute rebuff to provocations in the religious space. Archbishop Antony mentioned joint humanitarian actions of the Russian religious communities, including the one in Syria in February 2018, and also dwelt on the topic of migration and explained Russian experience in the solution of the problem.

Bishop Nikolai of Vasilkov also delivered a report at a panel session. The meeting in Bologna, having taken part in which by tradition were representatives of Christian, Muslim, Buddhist, Jewish and other communities from different countries as well as public and political leaders ended by issuing a joint declaration in defense of peace.