Source: DECR
Natalya Mihailova | 29 January 2015
The Inter-Religious Council in Russia has issued the following Statement on Freedom of Expression and Insult on the Feelings of Believers: 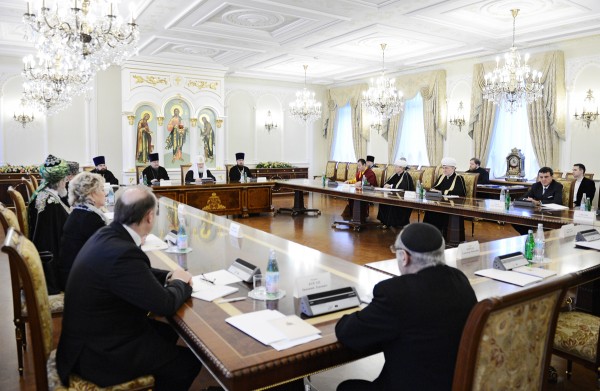 Human freedom and rights have always been understood by our religious traditions as expression of the recognition of high value of each person. In the course of secularization, the lofty principles of inalienable human rights have become understood without any relationship with the sacred dimension of life while the protection of personal freedom has been transformed into the defence of self-will opening the way to amorality, all-permissiveness, anarchy and tyranny. We do not approve of the liberal-secular, relativistic approach to the understanding of freedom whereby there are no absolute values and criteria and prosperity is the only thing that makes sense to seek after. With its ethical guidelines lost, freedom, which has become an idol and which is only focused on the satisfaction of personal needs, including ‘the freedom’ of ridicule on things held sacred by others, is incompatible with true human dignity and greatness.

Regrettably, such obvious traditional moral values as respect for religion or beliefs of others and search for peace stand in need to be declared and justified because the voice of conscience has degraded and has been quenched. Freedom needs to have limits; otherwise it may become violence against others in the form of direct physical impact or in the form of word capable of hurting the human soul.

Freedom is also bound up with the notion of responsibility. The conditions of the modern global world characterized by a high degree of contacts and interdependence between particular political, economic and cultural forces as well as the development of human resources and potential to build and to destroy make the problem of responsibility of the mass media as relevant as never before. As rude statements and sacrilegious caricatures insulting the feelings of believers inevitably provoke conflicts on interreligious and inter-ethnic grounds, all the public figures should be extremely careful towards such a sensitive area as religion and aware of possible consequences of their actions.

It should also be noted that in the modern mass conscience, the notion of ‘secularity’ is often wrongly identified with ‘secularism’. The principle of secularity meaning the separation of religious organizations from the state is not synonymous to the notion of ‘non-religious’ or ‘atheistic’. For instance, most people in Russia, being believers and at the same time secular workers are bearers of religious values. It is impossible to achieve social prosperity and harmony without respect for the culture that has developed through centuries and the moral-religious beliefs it keeps up. Therefore, a secular state should not only consider but also rely on the moral roots, and traditional religions can help this fair policy by asserting in society a clear awareness of the most important and fundamental values.

At the same time, we resolutely condemn terrorism as lawless and morals-free aggressive violence. Regrettably, the actions and voice of terrorists resound for many people louder than the voice of hundreds of millions of those who wish to live in peace. We call to break the closed circle of violence and mutual insult, to settle arising problems through dialogue and to seek for a fair and mutually acceptable resolution of the existing differences within legal boundaries.